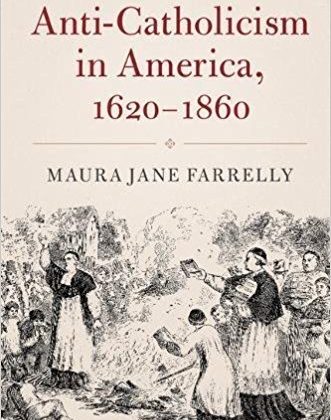 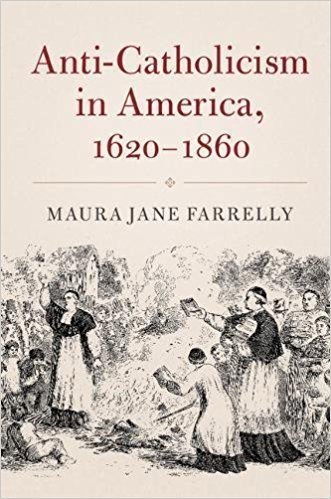 Maura Jane Farrelly is associate professor of American Studies at Brandeis University. This interview is based on her new book, Anti-Catholicism in America (Cambridge University Press, 2017).

JF: What led you to write Anti-Catholicism in America?

MJF: The boring answer is that Cambridge asked me to put together a narrative about anti-Catholicism in early America that could be used in an undergraduate classroom. The more interesting answer, however, has to do with my sense, while watching protests over the construction of an Islamic Cultural Center in lower Manhattan in 2010, that we have been here before.  Many immigrant groups have been viewed as a threat by native-born Americans — and sometimes, as is the case now, it’s been because those immigrant groups have been associated with violence.  But in the case of nineteenth-century Catholics and twenty-first-century Muslims, I think the fears were — are — about something deeper, as well.  The anxieties have been rooted in the not-entirely-unfounded sense that Catholics and Muslims have (or have had) an understanding of “freedom” that is  different from the American understanding of freedom.

JF: In 2 sentences, what is the argument of Anti-Catholicism in America?

MJF: The book argues that anti-Catholic bias played an essential role in shaping colonial and antebellum understandings of God, the individual, salvation, society, government, law, national identity, and freedom. For this reason, the early history of anti-Catholicism in America can provide us with a framework for understanding what is at stake in our contemporary debates about the place of Muslims and other non-Christian groups in the United States today.

JF: Why do we need to read Anti-Catholicism in America?

MJF: To give us hope — and maybe a bit of humility, too (she said with a striking lack of humility…).  As I note in my introduction, anti-Catholicism — which was such a salient force in America’s political and cultural history for such a long period of time — is basically gone now.  It’s a tool that is utilized primarily by internet trolls (and,  recently, by one thoughtless and impolitic senator from California who was looking to derail the nomination of a conservative law professor from Notre Dame to the 7th U.S. Circuit Court of Appeals.  But I think the collective response of political and religious leaders to Diane Feinstein’s questioning of Amy Coney Barrett confirms my assertion that anti-Catholicism is no longer an “acceptable” impulse in America.).  If the Catholic understanding of freedom can become more compatible with the American understanding of freedom — and the American understanding can become more compatible with the Catholic — then maybe the same will happen with Muslims?  And certainly the fact that our cultural understandings of freedom are protean — as any serious study of history will reveal — should give us all pause as we make political claims that are based on our sense of what freedom is and what it takes to secure it.

MJF: My journey to this place has been marked by some rather significant diversions (I worked as a reporter for several years — though Phil Graham, if he were still alive, might say I was just playing with the “first rough draft of history”…). But I think I first fell in love with early American history when my family and I took a summer vacation to Massachusetts. I was maybe 14 or 15 years old?  I still pinch myself, sometimes, that I now get to live in this state.

MJF: I may be leaving religion for a while.  I don’t know. I’ve stumbled upon a tragic story from the late nineteenth century that involves people from two prominent American families.  I’m hoping to use this story as a springboard into a greater exploration of the role of the frontier in defining American freedom (there’s the common thread, I guess…); the beginnings of the conservation movement; and the phenomenon of so-called “remittance men” and their place in the literature and lore of the American West.