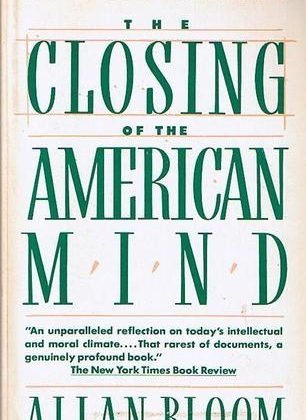 Allan Bloom‘s bestseller, The Closing of the American Mind, turns thirty this year.  Over at The Chronicle of Higher Education, cultural critic and New Left activist Todd Gitlin reflects:

“You can slam its young people into universities with their classrooms and laboratories, and when they come out all they can talk about is Babe Ruth. America is a hopeless country for intellectuals and thinking people.” Babe Ruth is the giveaway. These words were spoken in 1923, and the speaker was Theodore Dreiser, who had dropped out of Indiana University after one year.

So it is not a new thought that American universities are nests of self-betrayal and triviality where inquiring minds trade the nobility of their tradition for cheap trinkets and the promise of pieces of silver to come. Indeed, five years before Dreiser popped off, Thorstein Veblen was denouncing “the higher learning in America” for having surrendered to business domination, ditched the pure pursuit of knowledge, cultivated “conspicuous conformity to the popular taste,” and pandered to undergraduates by teaching them “ways and means of dissipation.” “The conduct of universities by business men,” to borrow from Veblen’s subtitle, had rendered university life “mechanistic.” Veblen anticipated that the academy would wallow in futility when it was not prostrating itself at the feet of the captains of finance. His original subtitle was A Study in Total Depravity. Veblen having dropped it, Allan Bloom should have picked it up.

Veblen thought the university had been seized by “pecuniary values.” To Bloom, whose bestselling book, The Closing of the American Mind, is celebrating its 30th anniversary this year, something much worse had happened: The university had been seized by the absence of values. “The university now offers no distinctive visage to the young person. He finds a democracy of the disciplines. … This democracy is really an anarchy, because there are no recognized rules for citizenship and no legitimate titles to rule. In short there is no vision, nor is there a set of competing visions, of what an educated human being is.”

A horde of bêtes noires had stampeded through the gates, and the resulting noise had drowned out the proper study of both nature and humanity. Nihilism had conquered. Its chief forms were cultural relativism, historicism, and shopping-mall indifference, the humanities’ lame attempts at a holding action that “flatters popular democratic tastes.” Openness was the new closure; elitism had become the worst of all isms.