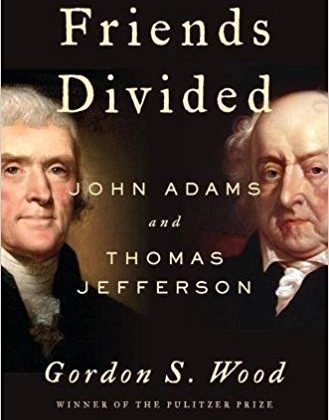 Gordon Wood is Professor Emeritus of History at Brown University. This interview is based on his new book, Friends Divided: John Adams and Thomas Jefferson (Penguin Press, 2017).

JF: What led you to write Friends Divided?

GW: I had just edited three volumes of writings of John Adams for the Library of America and planned to write a book on Adams. My editor at Penguin-Random House, Scott Moyers, asked, why not write on both Adams and Jefferson?  The suggestion was intriguing and that’s how the book began.

JF: In 2 sentences, what is the argument of Friends Divided?

GW: The two patriots, Adams and Jefferson, could not be more different. They represent the strains of conservatism and liberalism in American life, and yet they became friends, divided friends who reconciled late in life.

JF: Why do we need to read Friends Divided?

GW: I think reading the book will give a reader a heightened idea of the difference between conservatism and liberalism in our culture. It will also show why we Americans ultimately have come to honor Jefferson and not Adams.

GW: I originally intended to join the foreign service, but three bizarre years of  experience in the USAF convinced me that I would not enjoy working for the government; so instead I applied to graduate school to study history, which I had always been interested in.

GW: I am not sure what my next project might be. I first have to go on a book tour to promote this book.