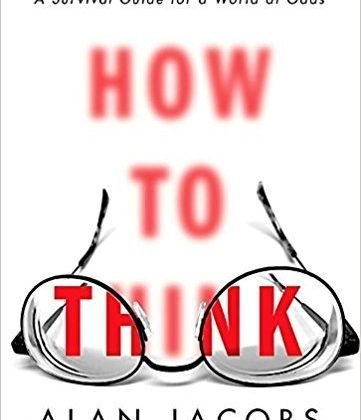 Baylor University humanities professor Alan Jacobs‘s latest book is How to Think: A Survival Guide for a World at Odds.  Over at Religion News Service, Jacobs talks with journalist Jonathan Merritt about the book and the state of Christian thinking.

RNS: What do you see is the core problem with many “thinkers?”

AJ: It’s hard to name just one thing — there are so many problems! So much bad thinking! But if I were forced to name one universal one it would be a lack of awareness of our own motives and incentives. A failure to realize that there are forces at work on and in all of us to discourage thought or even prevent it altogether.

RNS: What about American Christians, generally speaking? Are they good thinkers?

RNS: How can followers of Jesus become better critical thinkers? Give us one or two points that come to mind.

AJ: Christians of all people ought to be attentive to our own shortcomings, and the ways our dispositions of mind and heart and spirit can get in the way of knowing what’s true. After all, we’e the people who are supposed to believe that “all have sinned and fallen short of the glory of God,” and “the heart is deceitfully wicked above all things” and that sort of stuff. If we want to think better, then the first step should be to take those beliefs as seriously as many of us say we do, and to turn a ruthlessly skeptical eye on ourselves — before we turn it on our neighbors. There’s a line about specks in our neighbors’ eyes and logs in our own that applies here.

There’s a lot more to say, obviously, but I think self-skepticism is the place to begin.

Read the entire interview here and find out why Jacobs think it is impossible to
“think for yourself.”