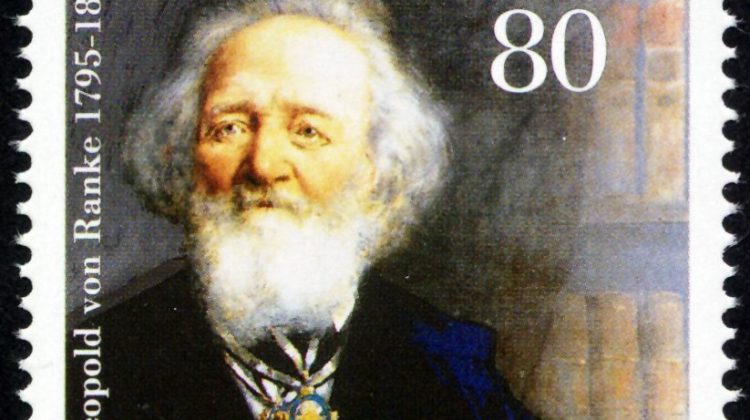 Apparently a high school student is sending e-mails to historians asking them about 19th-century German historian Leopold von Ranke.  The student is interested in whether or not these historians believe in “objectivity” in the writing of history.  As some of you know, von Ranke had a lot to say about the subject.

Here is what I wrote about him Why Study History?: Reflecting on the Importance of the Past:

p.49: One of the most important critics of a usable past was the nineteenth-century German historian Leopold von Ranke (1795-1886).  He introduced the concept of “historicism,” or the idea that historians should seek to understand the past on its own terms.  Historicism has since become a mainstay of the historical profession.  As Ranke put it, “History has had assigned to it the task of judging the past, or instructing the present for the benefit of ages to come.  To such lofty functions this work does not aspire.  Its aim is to know how things happened.”  Ranke wanted historians to study the past for its own sake, not because it has a usable function for guiding our lives in the present.  He rejected the notion that the past is useful in that it teaches moral lessons, inspires those who study it, strengthens civic bonds, or provides individuals and communities with a better sense of identity.  Rather, for him, history is a science, and historians can teach the Enlightenment ideal of objectivity in their work.  The task of the historian is a conservative one–to seek after objective truth and to narrate “what happened” in the past.  No more and no less.

Several historians have wondered whether the girl asking about von Ranke is a conservative activist of some kind. Here is a taste of Nick Roll’s piece at Inside Higher Ed:

Professors and graduate students at at least six institutions received correspondence from the same email address. Some professors and historians even think the student might be a fictitious character made up as part of a right-wing trolling scheme, or part of an effort to catch “liberal professors” in an embarrassing trap. Even if the student in question — who did not respond to multiple requests for comment at the Gmail address used to contact the professors — is just an kid doing research, in an age of “fake news” and partisan tension, historians are treading carefully.

James Grossman, executive director of the American Historical Association, said that his organization had become aware of the emails over the holiday weekend, and was planning a review of the situation — and what to do when members are approached by unverified students and members of the public — when staff returned Tuesday.

“This is one more reminder of the caution with which everyone should approach email and social media,” he said in an email. “When I receive a query from someone claiming to be a student but without an institutional address, I ask the name of their school and teacher. If I do not receive a satisfactory response I end the conversation.”

It was on Facebook that Greenberg noticed his peers had received similar emails. In one instance, the student had even sent graduate students at Harvard a link (which, as of Monday evening, was available here) to a survey asking for more detailed responses.

“At first one of my [Facebook] friends who is also [University of Texas, Dallas] faculty and I were wondering if this email might have originally come from someone at UTD, since we both got the email, but then when I learned of all the other schools getting it, it seemed to me that someone elsewhere must be casting a wider net,” Lora Burnett, a teaching fellow in history, said in an email to Inside Higher Ed.

What’s even more curious, Burnett pointed out on her blog, where she wrote about the incident, is that the University of Texas, Dallas, doesn’t have a formal history major, instead offering “historical studies.” So why would Burnett be of interest to a prospective history major, which the student claimed to be, Burnett thought. Unless, of course, the email is “fishing/trolling by a [right-wing] outlet looking to create a fake-scandal headline: ‘Liberal Professors Don’t Believe in Objective Truth About Past’ or some such nonsense.”

Forgive me if I am not yet ready to believe that this is a conspiracy theory.  If this is indeed a high school student working on a paper, the historical profession is going to look awfully silly. (Does this really merit an AHA investigation?).  This kind of stuff is the reason academic historians have such a hard time engaging the public effectively.  I hope we don’t have to explain all of this to the hard-working teacher who encouraged his or her student to e-mail professors for help.

Of course I could be wrong.  But when it comes to high school students and history teachers I always want to err on the side of caution.

Let’s for a moment give the conspiracy theorists the benefit of the doubt and say that this e-mailer is indeed a “right-wing” troll looking for a “fake-scandal headline.”  This wouldn’t be the first time academic historians have been accused of something sinister by the political Right.  If such a scandalous headline did appear, I would post the piece at my blog and use it as yet another opportunity to educate the public about what historians do and how they work.