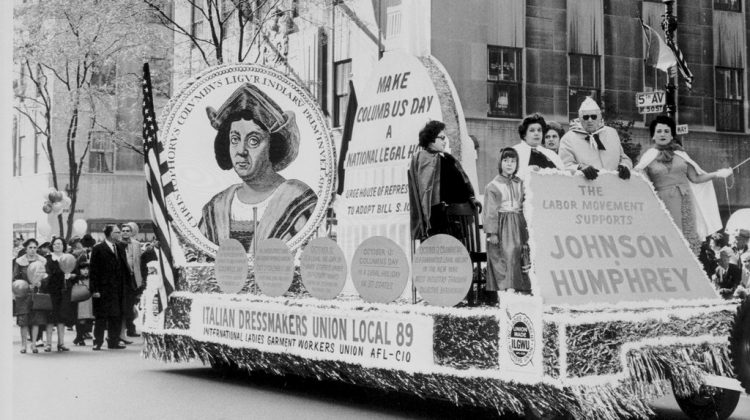 I have blogged about Columbus statues here and here, but I also want to call your attention to Yoni Appelbaum‘s piece at The Atlantic: “How Columbus Day Fell Victim to Its Own Success.”  The subtitle is “It’s worth remembering that the now controversial holiday started as a way to empower immigrants to celebrate diversity.”

Christopher Columbus has been, from the first, a powerful symbol of American nationalism. In the early American republic, Columbus provided a convenient means for the new nation to differentiate itself from the old world. His name, rendered as Columbia, became a byword for the United States. Americans represented their nation as a woman named Columbia, adopted Hail, Columbia! as an unofficial anthem, and located their capitol in the District of Columbia.

Italian-Americans, arriving in large numbers in the late nineteenth century, took note of the reverence which their famous countryman enjoyed. It was a far cry from the treatment they themselves received. Many Americans believed Italians to be racially inferior, their difference made visible by their “swarthy” or “brown” skins. They were often portrayed as primitive, violent, and unassimilable, and their Catholicism brought them in for further abuse. After an 1891 lynching of Italians in New Orleans, a New York Times editorial proclaimed Sicilians “a pest without mitigation,” adding, for good measure, that “our own rattlesnakes are as good citizens as they.”

Italians quickly adopted Columbus as a shield against the ethnic, racial, and religious discrimination they faced in their adoptive country. They promoted a narrative of national origins that traced back beyond Plymouth or Jamestown, all the way to San Salvador. How could a nation, they asked, reject the compatriots of its own discoverer?

Instead of accepting Italians, many nativists chose to reject Columbus. They cast about for a racially acceptable discoverer of the New World, and found him in Leif Erikson. The exploits of the great Viking explorer, recorded in Icelandic sagas, were already being promoted by Norwegian immigrants, eager to find acceptance of their own. If America did not, after all, owe its existence to an Italian Catholic, then there would be no need to accept his modern compatriots. “At a moment of increasing fear that the nation was committing race suicide,” explains historian Joanne Mancini, “the thought of Viking ghosts roaming the streets of a city increasingly filled with Irish, Italian, and Jewish hordes must have been comforting to an Anglo-Saxon elite.”

I don’t think the history of the holiday is broadly understood by protestors, nor how that conditions the response to their protests.