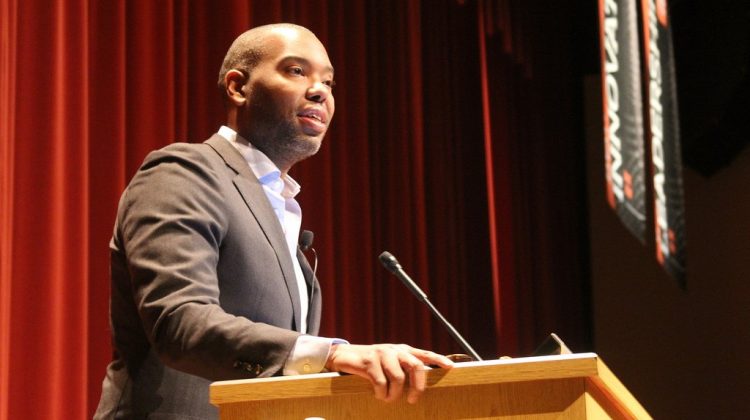 After his article “The First White President” appeared in The Atlantic, social critic Ta-Nehisi Coates tweeted:

Without the historians digging in the trenches, I got nothing. Appreciate all of you. I hope you know it.

Coates draws heavily from the work of American history, particularly historians of race and slavery.  I first encountered Coates when he writing blog posts on Edmund Morgan’s American Slavery–American Freedom.  I have been following him ever since.  Whatever one thinks about his views on race in America, Coates has done his homework.

At The Chronicle of Higher Education, Jordan Michael Smith writes about Coates’s relationship with historians.  Here is a taste:

When I spoke with him a few weeks ago, Coates was no less effusive about the significance of scholarship. “I really enjoy talking to historians, for the most part, because there’s so much — this is going to sound elitist but it’s true — there’s just a basic ignorance about facts in American history” among members of the public. He points to recent debates over the Confederacy, spurred by attempts to have monuments of Confederate leaders removed from public spaces. The disputes over whether Confederates were fighting to preserve slavery or states’ rights “would not fly in most history programs in this country,” he says. Even among journalists, he argues, there is a dearth of knowledge about something as crucial to understanding America as the Civil War.

There is in Coates’s work evidence of a fanboyish enthusiasm, an earnest affection for certain people, places, and things. They include rappers (his Twitter avatar is an image from an album by a member of the Wu-Tang Clan), the French language, and comic books. Among the adored are historians, political scientists, and sociologists. “He’s like our biggest supporter, and that’s really refreshing,” says Bryant Simon, a historian at Temple University. “I don’t know anyone else who deliberately” foregrounds a reliance on the work of academics to the same degree.

[Historian Manisha] Sinha describes Coates as “one of those rare writers who can effectively mine historians’ work. He has an intuitive grasp of the issues involved.” What Sinha finds particularly interesting is that Coates will develop his own take based on his reading, making him as much an active participant in the historicizing process as the people he reads.

Indeed, part of what sets Coates apart from other journalists or public intellectuals is that he tells his audience that historians’ works need to be consulted if they want to understand American history. Like any good high-school math student, Coates shows his work, illustrating which history books lead him to his conclusions.