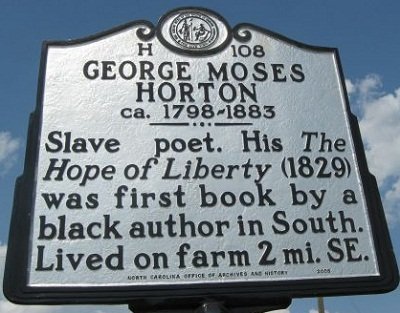 Learn more about Horton and this new find in Jennifer Schuessler’s piece at The New York Times:

The essay, a roughly 500-word sermonlike meditation called “Individual Influence,” was found at the New York Public Library by Jonathan Senchyne, an assistant professor of book history at the University of Wisconsin. The document, which will be published in October in PMLA — the journal of the Modern Language Association — appears to be the first prose essay in Horton’s handwriting to come to light, and one of only a handful of manuscripts in his own handwriting known to survive.

Today, while Horton is still far from a household literary name, he has been celebrated in a growing body of scholarship; in a children’s book; and in Chapel Hill, where the university renamed a dormitory in his honor, as part of continuing efforts to tell a fuller story of its historical relationship with slavery.

Any new text by Horton, scholars say, is a welcome discovery. “We’re unlikely to find much more from him, given his enslaved status,” said Faith Barrett, an associate professor of English at Duquesne University in Pittsburgh, who has written about Horton. “It’s really a wonderful find.”

“Individual Influence” is interesting not just for Horton’s lofty, abstract words about the primacy of divine influence, but for the context in which they were preserved: in a scrapbook of material relating to a prominent scholar who was forced out of the university after publicly opposing slavery.