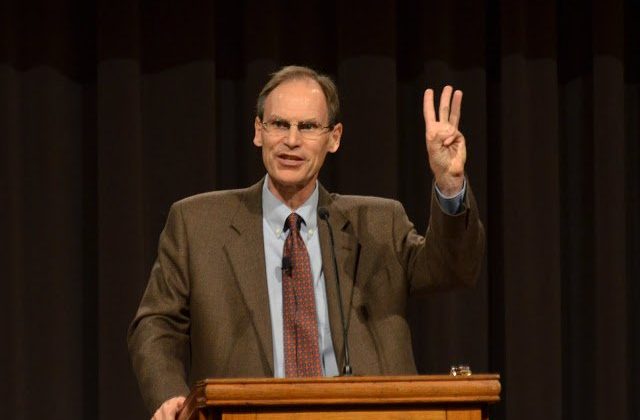 Erik Moshe continues to publish quality interviews at History News Network.  His latest interview is with Civil War historian George Rable, Professor Emeritus at the University of Alabama.  I did not know that Rable was a graduate of Bluffton University, a sister school of Messiah College.

Who was your favorite history teacher?

John D. Unruh, Jr. of Bluffton College. I was a first generation college student, uncertain of my major. In high school, I was more interested in mathematics than any other subject. I probably had always had at least some interest in history, but I hadn’t been one of these people who read Bruce Catton when they were 10 years old. Unruh had a reputation for being hard and even his United History survey was a bear. We had to write two 10-15 page historiographical essays. One based on scholarly articles. One based on scholarly articles and books. The course was arranged entirely thematically, a brilliant course. But Unruh was much more than simply a demanding teacher. He was an inspiring and deeply humane teacher who brought out the best in people.

After taking his survey course, I thought if this is what history is about, this is what I should study. This was the late 1960s and early 1970s, so I never thought very much about practical considerations and the job market. I took every class Unruh taught. His American West class was the equivalent of a graduate class. We read a book a week or the equivalent in articles and wrote papers every week. We had to read a book and write a paper for the first class session because he sent students the syllabi in campus mail before we had even met. One day he suggested that I go to graduate school. I doubt that I even knew what graduate school was. He also suggested I apply to LSU to work with T. Harry Williams.

When I was at Bluffton College, Unruh had not yet completed his dissertation but finally did so in the fall of 1975. The following January, he died of a brain tumor at the age of 38. The University of Illinois published what was essentially an unrevised dissertation as The Plains Across: The Overland Emigrants and the Trans-Mississippi West, 1840-60. The book won seven awards and was a Pulitzer finalist. The loss to students and the profession that came with Unruh’s death was incalculable.

Why did you choose history as your career?

Certainly the inspiring example of John Unruh described above set me on that path. Even though Unruh suggested I go to graduate school, this was the early 1970s and he also advised me on how tough the job market would be. At Louisiana State University, T. Harry Williams and William Cooper taught me a great deal about teaching and scholarship. It was Bill Cooper who first suggested I try to get something published. That first article clearly whetted my appetite for research and writing, and I have been heavily engaged in both for over forty years. On that score and many others I owe an enormous debt to the LSU History Department and especially to Williams and Cooper.

Since then my career has been divided in roughly equal halves—the first, teaching at Anderson College (later Anderson University) and the second at the University of Alabama. For all my reservations about the recent direction of higher education, I owe both these institutions a great deal for taking a chance on me and nurturing me as a teacher and scholar. One thing for certain, I have absolutely no doubt that a career in history was the right choice.

What qualities do you need to be a historian?

A historian needs to transcend his own time and immerse himself in another period. The purpose here is to understand, not to judge. I am not saying that moral imagination should not enter into the process, but preachy scholars often prove to be self-defeating. Historians should address significant topics and questions in ways that help readers understand human behavior and motivation in other times and places. This requires diligent research but just as important is good writing. Historians should always strive to produce work that a reasonably educated person with some (or even relatively little) interest in the subject can understand and appreciate. In terms of teaching, a historian obviously needs to be knowledgeable but also needs to bring both a passion for the subject and a love for students to the classroom.