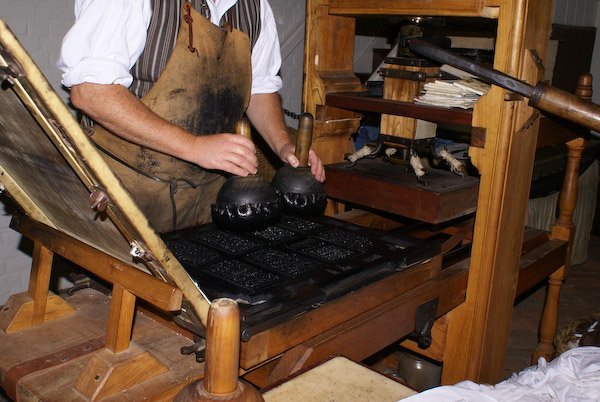 Early in my career I was very interested in the communication of information in early America.  One of the first pieces I ever published was an essay on the way letters were used to spread the First Great Awakening in New England.  One of my favorite reads in graduate school was Richard D. Brown’s Knowledge is Power: The Diffusion of Information in Early America.  I remember how thrilled I was when Brown agreed to chair a panel I put together for one of the early Omohundro Institute conferences in Worcester. I continued to explore the spread of information into the New Jersey countryside in my Stony Brook doctoral dissertation and some of this research found its way into my first book, The Way of Improvement Leads Home: Philip Vickers Fithian and the Rural Enlightenment in Early America.

So needless to say, I have been taking a walk down memory lane reading the recent series at Age of Revolutions blog on information networks.

The latest installment is Joe Adelman’s piece on printers.  Here is a taste of ” ‘Meer Mechanics’ No More: How Printers Shaped Information in the Revolutionary Age”:

The men and women who physically produced the texts lauded as key to the American Revolution rarely get their due. Their absence from the story of print and the American Revolution is not by accident, nor is it because scholars have a nefarious agenda to ignore the role of printers. On the contrary, it’s exactly how most, if not all, American colonial printers portrayed themselves and their careers. In so doing, they drew on a long tradition exemplified by Benjamin Franklin’s “Apology for Printers,” published in the Pennsylvania Gazette in 1731. Franklin declared that he and the Gazette were merely conveyances for the opinions of others, and that his only editorial judgment was to stay within the legal bounds of libel, opened a space for him to publish political essays and news items without claiming responsibility for them. In Franklin’s case, that decision was intentional. That characterization, it turns out, obscures the work printers were doing in their shops and along postal routes.


Prior to the past ten years, most scholars dismissed printers as manual laborers — men and women who set type and pulled the press, but did not intervene to shape the content of the texts they brought to life. The scholarship of Robert Darnton, however, invites us to think carefully about the full range of people who contributed to printed works: authors and readers, to be sure, but also the intermediaries who brought printed materials to light, including printers, publishers, wholesalers, post riders, and others.  Though his archival research focused on the ancien régime and revolutionary France, Darnton’s methodological interventions have encouraged scholars working on other regions (including British colonial North America, for example) to consider how the processes of production, circulation, and consumption have shaped not only texts but also historical events. Scholars in the past decade have paid more attention to printers and their activities, most notably with the publication of work by Robert Parkinson, Russ Castronovo, and others.  But more broadly it remains a truism that printers were not active participants in the intellectual production of news and arguments about the Revolution.