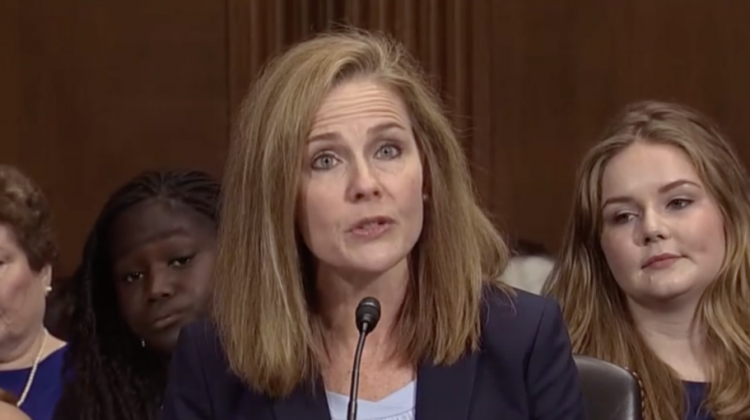 You may recall our recent post on Princeton University president Christopher L. Eisgruber’s criticism of the Democratic Senators who may have violated Article VI of the Constitution in their questioning of University of Notre Dame Professor Amy Barrett during her recent confirmation hearings for a federal judgeship.

Over the last several days, a host of smart people have joined Eisgruber in his criticism of Diane Feinstein, Dick Durbin, and Al Franken.  The latest is Notre Dame president John Jenkins.  Here is the bulk of his letter to Feinstein:

Considering your questioning of my colleague Amy Coney Barrett during the judicial confirmation hearing of September 6, I write to express my confidence in her competence and character, and deep concern at your line of questioning.

Professor Barrett has been a member of our faculty since 2002, and is a graduate of our law school. Her experience as a clerk for Judge Laurence Silberman of the U.S. Court of Appeals and Supreme Court Justice Antonin Scalia is of the highest order. So, too, is her scholarship in the areas of federal courts, constitutional law and statutory interpretation. I am not a legal scholar, but I have heard no one seriously challenge her impeccable legal credentials.

Your concern, as you expressed it, is that “dogma lives loudly in [Professor Barrett], and that is a concern when you come to big issues that large numbers of people have fought for years in this country.” I am one in whose heart “dogma lives loudly,” as it has for centuries in the lives of many Americans, some of whom have given their lives in service to this nation. Indeed, it lived loudly in the hearts of those who founded our nation as one where citizens could practice their faith freely and without apology.

Professor Barrett has made it clear that she would “follow unflinchingly” all legal precedent and, in rare cases in which her conscience would not allow her to do so, she would recuse herself. I can assure you that she is a person of integrity who acts in accord with the principles she articulates.

It is chilling to hear from a United States Senator that this might now disqualify someone from service as a federal judge. I ask you and your colleagues to respect those in whom “dogma lives loudly”—which is a condition we call faith. For the attempt to live such faith while one upholds the law should command respect, not evoke concern.

Many people have defended the Senators’ line of questioning, including some of the readers of The Way of Improvement Leads Home.  They say that if the faith of a religious judge is going to result in taking away the rights of others, then asking questions about religious belief is perfectly fair.  Some can get quite passionate about it.  But the bottom line is this:  The people who have interpreted this line of questioning as a possible violation of Article VI are no intellectual slouches. They also represent, to one degree or another, a significant portion of the American electorate.

This debate over religious liberty and test oaths reveals the deep divide in this country right now.  What makes this so intense is the fact that both sides of the debate appeal to American ideals–religious liberty, individual rights, and the disestablishment of religion, to name only a few.  I am not sure how these social issues can be resolved as long as people like Franken, Durbin, Feinstein, Sanders, the authors of the Nashville Statement, the court evangelicals, and many others continue to dig-in their heels.