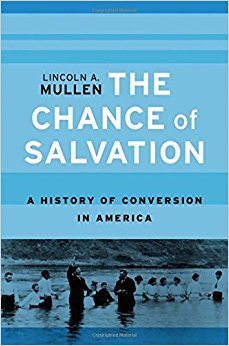 Lincoln Mullen is Assistant Professor of History and Art History at George Mason University. This interview is based on his new book, The Chance of Salvation: A History of Conversion in America (Harvard University Press, 2017).

JF: What led you to write The Chance of Salvation?

LM: Early in graduate school I had the good fortune to do a reading course in American religious history with Jonathan Sarna, who became my PhD director. After that course I wanted to tell as broad a story about American religion as I could muster. The theme of conversion offers the chance to both compare religious groups and observe their interactions, so it became my way to write that kind of history.

JF: In 2 sentences, what is the argument of The Chance of Salvation?

LM: Over the course of the nineteenth-century, pressures to convert, actual conversions between religious groups, and the possibility of having no religious affiliation at all changed the basis of religious identity from inheritance to choice. But that process played out very differently for different groups, so the chapters on black and white Protestants, Cherokee converts, Mormons, Jews, and Catholics see how the spread of that idea refracted through different religious traditions.

JF: Why do we need to read The Chance of Salvation?

LM: Different audiences will likely come to the book for different reasons.

I’d like for scholars in the field of American religious history to read it as a synthesis of nineteenth-century religious history on the basis of primary research on the topic of conversion. This book is hardly the first or only to attempt to put the field together in this way, but it isn’t a common approach either. Few books that aren’t textbooks try to bring so many religious groups together; most books are narrowly focused. So what other kinds of primary synthesis might scholars write?

Other readers might be interested in the book because of their own religious commitments, or even because they are converts. Those readers will find the book’s story both strange and familiar. Familiar, I hope, because they will recognize themselves in some of the book’s many stories of converts. But I hope they also find the book strange because people like to talk about their religious choices as being free, but the book shows the ways those choices are obligated and constrained. It’s their story, but not the way they would tell it.

And if you come to the book because someone assigned it for class, at least you get to cover a pretty wide swathe of nineteenth-century religious history in one book.

LM: In high school I thought I would go into mathematics or the like. But there were more history books than math books around the house.