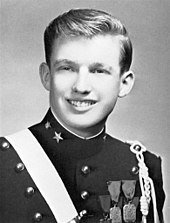 What did Donald Trump learn about American history during his childhood in New York?  Matt Ford, a writer at The Atlantic, decided to go back and take a look at the American history textbooks assigned in Trump’s history classes.

Here is a taste of his piece “What Trump’s Generation Learned About the Civil War.”

Until the late 1960s, history curricula in Trump’s home state of New York largely adhered to a narrow vision of American history, especially when discussing slavery, the Civil War, and its aftermath. This was true in the predominately white public schools throughout the country. The African American experience and its broader significance received little to no attention. When textbooks did cover black Americans, their portrayals were often based on racist tropes or otherwise negative stereotypes. Trump’s understanding of the Civil War may be out of step with current scholarship, but it’s one that was taught to millions of Americans for decades.

“The dominant story was that secession was a mistake, but so was Reconstruction,” Jonathan Zimmerman, a New York University professor who studies the history of American education, told me. “And Reconstruction was a mistake because [the North] put ‘childlike’ and ‘bestial’ blacks in charge of the South, and the only thing that saved white womanhood was the Ku Klux Klan. When African Americans read this in their textbooks, they obviously bristled….”

Many of these textbooks still taught something akin to “The Dunning School,” an approach to the Civil War and Reconstruction that was critical of Northern efforts to bring racial equality to the immediate postwar South.

Racist material permeated other sections of the American curriculum, well beyond the field of history. Geography textbooks depicted Africa as “the dark continent” and either ignored it or portrayed it as a place of cannibalism and barbarity. “[Black] critics condemned biology textbooks, which often reflected eugenic theories of racial hierarchy,” Zimmerman wrote in a 2004 article on U.S. textbook changes after the Supreme Court’s Brown v. Board of Education decision. “Still other blacks attacked music textbooks for including songs by [prolific 19th-century songwriter] Stephen Foster, complete with Foster’s original lexicon—‘darkey,’ ‘nigger,’ and so on.”

These textbooks shouldn’t be interpreted as reflecting their readers’ views, Zimmerman cautioned me. Instead, they offer a window into what students would have learned in a previous era. “This tells us more about the culture of race as expressed in the curriculum than it does about what any given individual imbibed or not,” he explained.