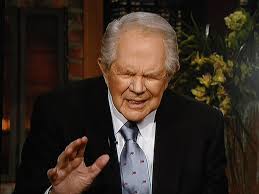 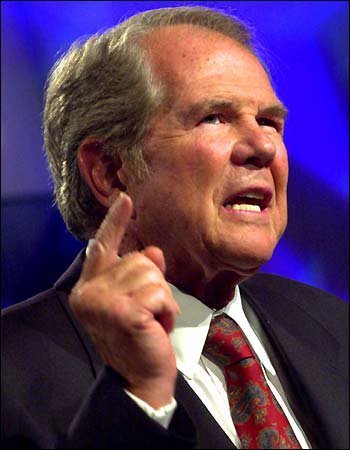 If you have not seen it yet, VOX is running Tara Isabella Burton‘s revealing interview with Terry Heaton, the former producer of Pat Robertson’s The 700 Club.   Heaton is the author of a new book on his experience with Robertson and his Christian Broadcasting Network titled The Gospel of the Self: How Jesus Joined the GOP.

In today’s political climate, it seems like there’s an even stronger relationship than ever between CBN and the current administration. Pat Robertson’s been landing exclusive sit-down interviews with Trump, and CBN’s new shows like Faith Nation are further blurring the line between news and opinion. What do you make of that?

First of all, regarding Pat and his relationship with Donald Trump — I think that’s very, very scary. As smart as Pat Robertson is, and as good as he is at marketing, he is also highly susceptible to his own hype. In that way, Trump plays him like a piano. If you watch his most recent interview, some of the things that Trump says to Pat are really way out there in terms of manipulating Pat. He builds him up like a salesman would, and Pat is susceptible to that, I think. But he wouldn’t be susceptible if Trump didn’t speak the language that Pat wants.

There is such fear on the right about the Supreme Court. I remember one show that we were taping in which Pat prayed that God would kill the Supreme Court justices. We had to stop the tape and advise him that he couldn’t say that on TV. But that’s the way he felt. Trump really sings Pat’s tune when it comes to the Supreme Court, also on the issue of religious liberty. When Trump starts talking about how Christianity is going to be “great again,” people like Pat sit up at listen. And they’ll support him whenever necessary — even if it means blowing up North Korea!