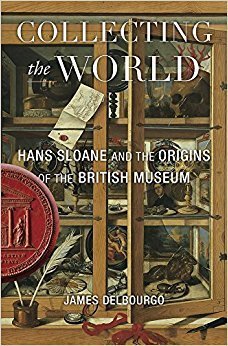 James Delbourgo is Associate Professor of History of Science and Atlantic World at Rutgers University. This interview is based on his new book, Collecting the World: Hans Sloane and the Origins of the British Museum (Belknap Press: An Imprint of Harvard University Press, 2017).

JF: What led you to write Collecting the World?

JD: My first book was on electricity in colonial North America and I wanted to see what the pursuit of science looked like from a completely different angle. When I learned that Hans Sloane, the founder of the British Museum (1753), had been in Jamaica and made natural history collections there, I was fascinated. What was the future founder of the world’s first national public museum doing in the Caribbean and what were the links between slavery and the origins of that museum? I was never taught this in school and thought many readers would be interested in the answer. I was also fascinated by the idea of a universal collection and a museum that aspired to contain every kind of thing in the world. We live in an age where universalism is often critiqued and mistrusted but the early modern era and the origins of museums were powerfully inspired by notions of the universal.

JF: In 2 sentences, what is the argument of Collecting the World?

JD: One argument is that collecting things always involves collecting people: there is no such thing as “a collector” in the sense of an isolated individual and Sloane relied on worldwide networks to accumulate the thousands of objects which the British Museum was created to house. The second is that Sloane is vital for understanding the complex legacy of the Enlightenment: out of slavery and imperialism emerged the first articulation of an ideal of universal free public access to museums and their collections, an ideal we still cherish and must defend today.

JF: Why do we need to read Collecting the World?

JD: It is the first book to tell the full story of how the world’s first public museum came into being, and shows how that enlightened institution owes its origins to slavery and imperialism, while also championing Sloane’s legacy in calling for universal access to museums and knowledge. Sloane is a compelling contradiction and defies easy categorization: he embodies the relationship between enlightenment and imperialism and his collections embody the great global collision of peoples that took place in the long eighteenth century. It’s also a story about universal knowledge and the dream of total information, and what their pursuit actually entailed. This dream is familiar to us today through digital technology and the internet, but Sloane’s house in eighteenth-century London — where he sought to assemble a universal museum — is an important to precursor to this ongoing ideal of somehow collecting the entire world in a single place. Finally, it’s a book that connects several historical subdisciplines — from the history of science to the history of the African diaspora — and urges us to move beyond academic specialization to tell richer, more complex stories for a broad reading public.

JD: I was completing my first year as an undergraduate student at the University of East Anglia in the UK and wrote a seminar paper about Abraham Lincoln’s theory of the union for Professor Dan Richter who was visiting professor that year. It was a liberating experience to try to understand someone else’s thinking in a completely foreign time and place. As one wit has quipped, all the best stories are true. I once explained my work to a member of my family, who listened carefully and then replied, “But you really live in the past then?” Yes.

JD: I have several current research interests which include the history of collecting; global & Atlantic histories of science especially in the early modern period; and the transport of key objects from around the world into various museum collections.