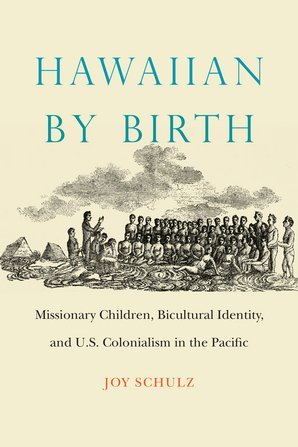 Joy Schulz is a Professor of History at Metropolitan Community College in Omaha, Nebraska. This interview is based on her new book, Hawaiian By Birth: Missionary Children, Bicultural Identity and U.S. Colonialism in the Pacific (University of Nebraska Press, 2017).

JF: What led you to write Hawaiian By Birth?

JS: When I first visited Honolulu as a teenager, I was struck by the fact that I was a racial minority. I remember wondering if I was feeling to a very small degree what my nonwhite friends in Nebraska felt on a daily basis. Later, after being introduced to the history of U.S. annexation of the Hawaiian Islands, I wondered why “the missionary boys,” as native Hawaiians called the annexationists, would overthrow their Christian queen. When I dug a little deeper and realized that hundreds of white children had grown up in the Hawaiian Islands as subjects of the Hawaiian monarchy, I became fascinated by their story. Having missionary friends who were raising their own children outside of the United States, I thought the topics of citizenship, national identity, and Christian mission—as they related to missionary children—were worthy of further exploration. The fact that the missionary children in Hawaii left extensive written records only made the project more exciting to me.

JF: In two sentences, what is the argument of Hawaiian By Birth?

JS: Hawaiian By Birth is the history of U.S. colonization of the Hawaiian Islands as told by the children of nineteenth-century American missionaries living in the Islands. Hawaiian By Birth explains how American colonization was a domestic and generational endeavor, undertaken by missionary parents out of tremendous fear for their children’s economic futures, but completed by the children, whose views on race, religion, politics, and the environment were directly influenced by their bicultural upbringing.

JF: Why do we need to read Hawaiian By Birth?

JF: When and why did you become an American historian?

JS: I decided to become a historian after hearing my college history professor describe the discipline. He told our class: if you like to read, think independently, and manage your own time, but also enjoy people, the discipline of history might be for you. I think I declared my major that same day!