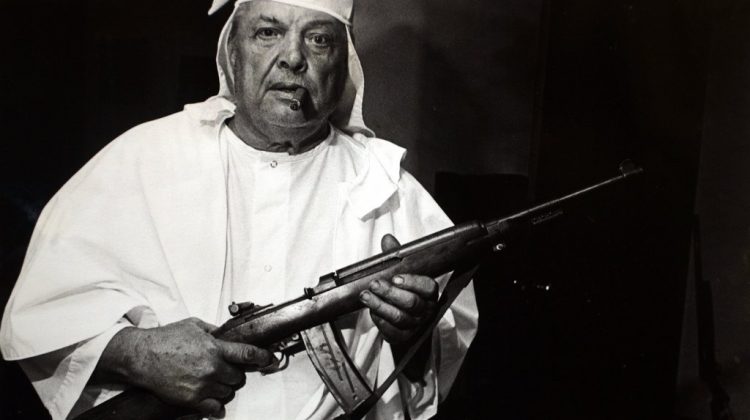 Jon Meacham lays it out for us in this piece at Time.

The message was clear. The fate of America — or at least of white America, which was the only America that counted — was at stake. On the autumn evening of Thursday, Oct. 7, 1948, South Carolina Governor Strom Thurmond, the segregationist Dixiecrat nominee for President, addressed a crowd of 1,000 inside the University of Virginia’s Cabell Hall in Charlottesville, Va. Attacking President Truman’s civil rights program, one that included anti-lynching legislation and protections against racial discrimination in hiring, Thurmond denounced these moves toward racial justice, saying such measures “would undermine the American way of life and outrage the Bill of Rights.” Interrupted by applause and standing ovations, Thurmond was in his element in the Old Confederacy. “I want to tell you, ladies and gentlemen,” Thurmond had told the breakaway States’ Rights Democratic Party at its July convention in Birmingham, Ala., “that there’s not enough troops in the Army to force the Southern people to break down segregation and admit the nigra race into our theaters, into our swimming pools, into our homes, into our churches.”

Seventy years on, in the heat of a Virginia August, heirs to the Dixiecrats’ platform of hate and exclusion — Klansmen, neo-Nazis and white supremacists of sundry affiliations — gathered in Charlottesville, not far from where Thurmond had taken his stand. The story is depressingly well known by now: a young counterprotester, Heather Heyer, was killed by a barreling car allegedly driven by a man who was seen marching with a neo-Nazi group. In the wake of Heyer’s death, the President of the United States — himself an heir to the white populist tradition of Thurmond and of Alabama’s George Wallace — flailed about, declining to directly denounce the white supremacists for nearly 48 hours. There was, he said, hate “on many sides,” as if there were more than one side to a conflict between neo-Nazis who idolize Adolf Hitler and Americans who stood against Klansmen and proto–Third Reich storm troopers. Within days Donald Trump had wondered aloud why people weren’t more upset by the “alt-left,” clearly identifying himself with neo-Confederate sentiment.

Perennially latent, extremist and racist nationalism tends to spike in periods of economic and social stress like ours. Americans today have little trust in government; household incomes woefully lag behind our usual middle-class expectations. As the world saw in Charlottesville — and in the alt-right universe of the Web — besieged whites, frightened of change, are seeking refuge in the one thing a shifting world cannot take away from them: the color of their skin.