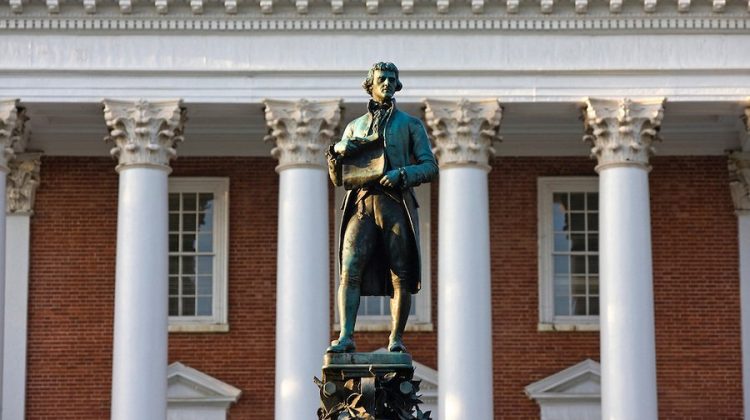 I have been trying to say something like this throughout the week, but I can’t say it as well or with the expertise and authority of  Annette Gordon-Reed:

Today, a time of intense focus on the personal and of misplaced faith in the importance of sincerity, we question whether Jefferson really believed the words “all men are created equal,” as if ideas are only as important and powerful as the personal will of the individual who utters them. The Confederates knew better than that. Ideas can have a power and life of their own. They weren’t taking any chances. They saw Jefferson as a public man who had put ideas into popular discourse that could be used in opposition to the society they hoped to build. The Confederates took him at his word, thinking it important to mention him by name and repudiate what they took to be his views. Alexander Stephens’s famous “Cornerstone Speech” said that Jefferson was wrong, insisting that blacks were not the equals of whites and, therefore, slavery was A-OK.

I cannot help thinking that the menaced people standing around the statue, no doubt holding many different views about Jefferson the man, symbolize the fragility of the idea of progress and aspirations for the improvement of humankind: the ideals that animated Jefferson in the Declaration, his insistence on the separation of church and state, his belief in public education, religious tolerance, and science. It must be said, they also animated what Jefferson knew by the end of his life to be the pipe dream of solving the slavery question, and wiping away the transgression of slavery, by giving blacks their own country—whether they wanted one or not. When he wrote his will freeing five enslaved men, he requested that they be allowed to remain in Virginia “where their families and connexions” were (an 1806 law would otherwise have required them to leave the state within a year). That is, of course, why all blacks in America should have had the right to stay in the country. He did this while other slave owners were freeing enslaved people on the condition

that they be sent to Liberia. The simple fact is that as brilliant as he may have been, Jefferson had no real answer to the slavery question. Although  historians do not like the concept of inevitability, legalized slavery was destroyed in the most likely way it could have been destroyed.

American ideals have always clashed with harsh American realities. We saw that clash on the grounds of UVA. But how do we continue in the face of depressing realities to allow ourselves to hold fast to the importance of having aspirations, and recognize that the pursuit of high ideals—even if carried out imperfectly—offers the only real chance of bringing forth good  in the world? In many ways, grappling with that question is what being a scholar of Jefferson is all about. Perhaps coming fully to grips with the paradoxes that Jefferson’s life presents is what being an American is about. Even if one rejects that formulation, there is no doubt that he remains one of the best ways we have of exploring and understanding the strengths and weaknesses of the American experiment displayed so vividly last week in Charlottesville.

Read the entire piece at the New York Review of Books