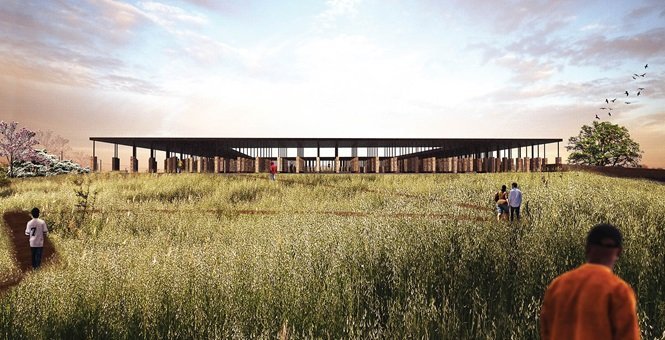 I am glad to see Christianity Today tackling this issue.  Some of you are familiar with the work of Bryan Stevenson and the Equal Justice Imitative (EJI) in Montgomery, Alabama. I had a chance to visit EJI this summer.  Stevenson was also the Messiah College commencement speaker in May 2017.  He is the author of Just Mercy: A Story of Justice and Redemption.

EJI is a fascinating and moving place that combines the history of lynching in America with the reform of the criminal justice system as it relates to death row inmates.  I wrote about my visit here.

When I was in Montgomery I learned about EJI’s plans to build a monument to lynching in America.  D.L. Mayfield writes about it in Christianity Today’s September 2017 cover story.

So Stevenson decided to make one. Next summer, EJI will unveil a memorial where visitors will be confronted with large tablets hanging from a square structure, visual reminders of more than 800 counties where lynchings took place. The visual—so many markers engraved with so many names—will transform a hill overlooking downtown Montgomery, Alabama, into a place of mourning and remembrance, a place to lament and perhaps even to corporately confess.

The Memorial for Peace and Justice, as it will be called, will also encompass a field spreading next to the main structure. In that field, each hanging tablet will have an identical twin resting on the ground, invoking an eerie similarity to headstones. These markers will be for the counties themselves to collect. Stevenson dreams of groups journeying to Montgomery, collecting their rightful part of lynching history, and displaying it prominently back in their towns and cities. If people from a particular locale choose not to claim their piece, it will sit in stark relief on that Montgomery hilltop, a conspicuous token of unowned sin.