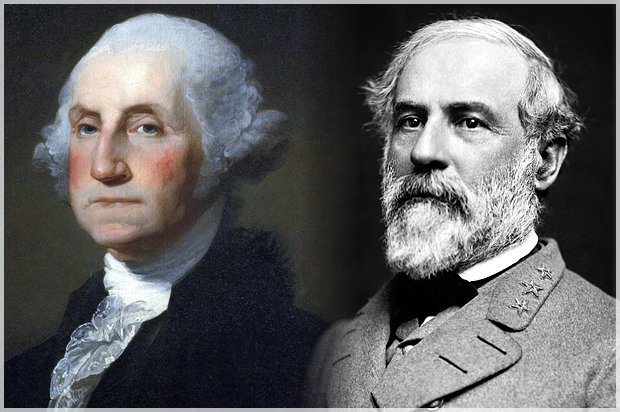 Yes, they both own slaves. Yes, they were both Virginians.  One lived in the eighteenth-century, the other in the nineteenth.  Lee was the president of a college that Washington helped to keep alive.

George Washington led an army to fight for liberty against what he perceived to be a tyrannical British government.  Yes, he was the product of a southern culture in which liberty and freedom were only afforded to white people.  And yes, the Revolution that he led was riddled with hypocrisy on this front.  These are essential points and must be acknowledged when we teach the American Revolution.   Washington freed his slaves when he died and the revolution he helped set in motion would, eventually, lead to the end of slavery in America despite the fact that Robert E. Lee did his best to stop such progress.  By all accounts, Lee was a Christian and a noble man.  But he also led an army built to preserve the institution of slavery and the white supremacy that came with it.

John Dowd, the lawyer for Donald Trump’s legal team, recently forwarded an e-mail to conservative journalists for the purpose of defending the comments POTUS made on Tuesday equating the white supremacists at Charlottesville with those who came to protest against them.  In the e-mail he wrote “You cannot be against General Lee and be for General Washington–there is literally no difference between the two men.”

“Literally no difference.”  This is why we need to invest more money into historical education and historical thinking.  As I have said before, we need historians more than ever.  It is NOT a useless major.

Dowd’s e-mail went on to explain that Lee is no different than Washington because:

This is just a quick answer.  I hope some historian will respond more thoroughly.

The New York Times broke the story and has some solid commentary from Civil War historian Judith Giesberg.   She reminds us that the Confederacy used Washington’s image, legacy, and role in the War for Independence to justify their own cause. The Lost Cause also invoked Washington.  I don’t know much about the history of Washington and Lee University, but I imagine that it was important to the leaders of the college to attach Lee’s name to Washington’s after the Confederate general died in 1870.

Here is the piece.