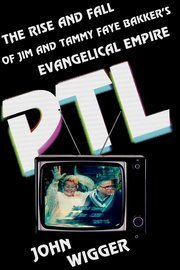 John Wigger is a Professor of History at the University of Missouri. This interview is based on his new book, PTL: The Rise and Fall of Jim and Tammy Faye Bakker’s Evangelical Empire (Oxford University Press, 2017).

JF: What led you to write PTL?

JW: I was fascinated by how fast PTL grew and how quickly it fell apart. What I really wanted to know was how PTL’s rise and fall were connected. How does deep religious devotion become so entwined with money, sex, and celebrity on a Hollywood scale? A short synopsis might help:

Jim and Tammy started the PTL network with half a dozen employees in a former furniture store in 1974. By 1986 PTL had annual revenues of $129 million, 2500 employees, a 2300-acre theme park, Heritage USA, and a private satellite network that reached into fourteen million homes in the US. That year, six million people visited Heritage USA. Jim and Tammy lived in luxury, buying vacation homes, expensive cars covered with One Sure Insurance and clothes, and traveling first class with an entourage. Then it all came crashing down. In March 1987 Bakker resigned in disgrace after his 1980 sexual encounter with Jessica Hahn in a Florida hotel room became public. Stories emerged about gay relationships and visits to prostitutes. By the end of the year, PTL was in bankruptcy, headed for liquidation. In 1989 Bakker was convicted of wire and mail fraud and sentenced to 45 years in prison.

JF: In 2 sentences, what is the argument of PTL?

JW: PTL helps to explain the persistent connections between religion and popular culture in American life, a connection that runs much deeper than politics alone. PTL grew so quickly because of its embrace of consumer and celebrity culture, much of it through the prosperity gospel, but along the way the money and fame undermined the religious convictions of those at the top.

JF: Why do we need to read PTL?

JW: It’s a story full of human drama, sincere faith, innovations both cultural and technical, financial fraud, secret affairs, and the allure of television cameras. But it also says a lot about why faith continues to be vibrant part of American life. Many of the central characters in the story—Jim and Tammy Bakker, Richard Dortch, David Taggart, John Wesley Fletcher, and of course Jessica Hahn—seem almost too improbable for a novel. But together they helped first to build one of the largest ministries in recent American history and then to bring it down.

JW: History and academia are a second career for me. My undergraduate degree is in Petroleum Engineering. After college I drilled oil and gas wells in California for about six years. Part of that time I lived a few blocks from the beach. One day I woke up and thought, I’m having too much fun and making too much money, what should I do? Grad school seemed the obvious answer. Okay, more seriously, I’ve always been interested in the connections between religion and culture in American life and how those connections have persisted and shifted over time. That’s what led me to switch careers and what this book is about.

JW: I’m not exactly sure. Hopefully something surprising that will make a good read.