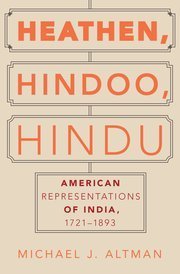 Michael J. Altman is Assistant Professor of Religious Studies at the University of Alabama. This interview is based on his new book, Heathen, Hindoo, Hindu: American Representations of India, 1721-1893 (Oxford University Press, 2017).

JF: What led you to write Heathen, Hindoo, Hindu?

MA: The book actually began as my MA thesis at Duke. I came into grad school unsure if I wanted to study religion in America or colonial India. After taking seminars in both, I started wondering if I could draw the two interests together. I was talking about this with Tom Tweed, who was teaching at UNC-Chapel Hill then, and he mentioned that no one had done much work on all the references to Hinduism in nineteenth century sources. With the help of Lila Prasad and Jason Bivins, I started digging around and found a lot of really interesting stuff in the archives. I wrote the thesis and new that I had more than enough material to expand it into a dissertation. So, I went to Emory and wrote my dissertation on representations of Hindu religions in nineteenth century America. I then heavily revised the framing of that dissertation for Heathen, Hindoo, Hindu. The book is much sharper than the dissertation. I pay particular attention to the language used by the sources to represent religion in India and I don’t assume that all of the representations are somehow referring to the same object, Hinduism. Rather, I’m particularly interested in how each representation functions to serve the interests of various Americans engaged in cultural, religious, and political conflicts about what it means to be American.

JF: In 2 sentences, what is the argument of Heathen, Hindoo, Hindu?

MA: Americans represented religion and people in India in a variety of ways during the nineteenth century and those representations functioned within conflicts over what counted as religion and American. Americans argued about “those people over there” in their fights about what it mean to be “one of us.”

JF: Why do we need to read Heathen, Hindoo, Hindu?

MA: There are three reasons you need to read this book. First, American religious historians have largely ignored the role of Asian religions in America during the nineteenth century. This book begins to open up space to see how Asia, and specifically India, played an important role in American religious history earlier than we usually think. Second, the book uses India and Hindus as a case study for telling the larger narrative of the rise of comparative religion and religious studies in American history. In that sense it historicizes the field of comparative religion and begins to put comparative religion into American religious history. Third, the book also offers a new approach to “religion” in American history that takes a genealogical approach. By that I mean that I am most interested in how categories are formed in culture. For example, Hannah Adams discussed “Hindoos” within a framework where there were four religions in the world: Christianity, Judaism, Islam, and heathenism. But in 1893 “Hinduism” was one ten “world religions” at the World’s Parliament of Religions. How did that conceptual change in what counted as religion happen?

MA: I’m not sure if I am. Readers can tell me if what I’ve done in the book is American history or not. While I was doing my Ph.D. in Religion, I was privileged to work with great American and church historians like Brooks Holifield. So even though my training and work falls more within religious studies, I’ve benefited from spending time with and reading a lot of excellent American historians (this blog included). I like to think of myself as moving in between American history and religious studies and trying to draw on both of them in my work.

MA: I have two projects I’m getting started on right now. First, I’m working on a cultural history of Mohandas Gandhi in America. Like Heathen, Hindoo, Hindu, I’m interested in the variety of ways Gandhi was represented in American culture from the 1930s to today. It’s not a biography of Gandhi, more like a biography of the idea of Gandhi. Second, I’m also working on a very meta-level genealogy (or maybe it’s a historiography?) of the connections between American Religious history, Christianity, liberal political philosophy, and the English Civil War.