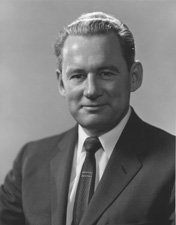 Check out James Fallows’s piece at The Atlantic on former California Senator Clair Engle and his heroic vote to end a Senate filibuster that cleared the way for the passage of the Civil Rights Act of 1964.

Few of today’s politicians or political writers have even heard of Clair Engle. I had to learn his name, in grade school civics courses in California, because he was one of our state’s two U.S. senators. (No one will remember the other: Thomas Kuchel, pronounced keekle, a Republican who succeeded none other than Richard Nixon as senator when Nixon became vice president under Dwight Eisenhower.) Engle was a Democrat, the first Democrat to win a Senate seat in California in the 20th century. While in office he was known mainly for supporting California-related public works programs, and for flying his own airplane all around to see constituents, including through the vast, rural Second District that made up most of the northern part of the state and that he had represented as a congressman.

Then in the summer of 1963, when Clair Engle was 51 years old, a generation younger than John McCain today, he was diagnosed with a brain tumor, and underwent surgery. Within six months, he was partially paralyzed and unable to speak. Within a year of his diagnosis, in the summer of 1964, he was dead, at age 52.

But in those final few months, Clair Engle chose to do something remarkable—in fact the main thing for which he is now known.