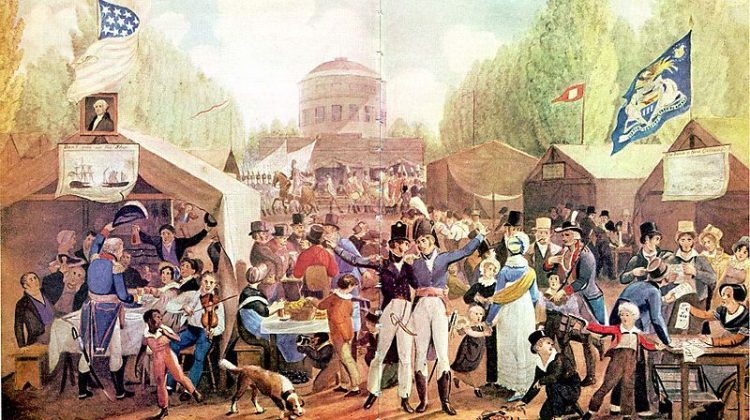 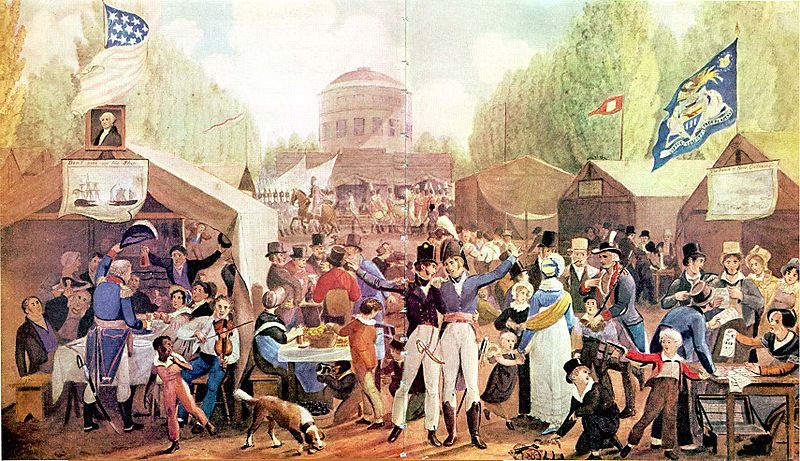 Last week we did a few posts on Sara Georgini’s series at the U.S. Intellectual History blog on “The Era of Good Feelings.”  Today we call your attention to Erick Trickey’s piece at Smithsonian.com.  Here is a taste:

Monroe won the 1816 election in a landslide and developed a plan to, in his words, “prevent the re-organization and revival of the federal party” and “exterminate all party divisions in our country.” His motives were mixed. Like Washington, he believed that political parties were unnecessary to good government, but he was also furious at the wartime Federalist secessionist movement. He froze out the Federalists, gave them no patronage, and didn’t even acknowledge them as members of a party. But publicly, Monroe made no partisan comments, instead appealing to all Americans on the basis of patriotism. “Discord does not belong to our system,” he declared in his inaugural address. “Harmony among Americans… will be the object of my constant and zealous attentions.”

Emulating Washington’s tours of the nation as president, Monroe set out on his first goodwill tour on June 1, 1817. He spent all summer touring the nation, traveling by steamboat and carriage and on horseback. Like politicians today, he shook hands with aging veterans and kissed little kids. He toured farms, hobnobbed with welcoming committees, and patiently endured endless speeches by local judges.

Boston was the biggest test of Monroe’s goodwill. Massachusetts was the nation’s citadel of Federalism, and it had voted for Monroe’s opponent, Rufus King, in 1816. But Boston seized the chance for reconciliation, greeting Monroe with boys clothed in mini-versions of Revolutionary attire and 2,000 girls in white dresses, decorated with either white or red roses, to symbolize the reconciliation of the Federalists and Democratic-Republicans.

The night of his victorious appearance on Boston Common, Monroe attended a dinner hosted by Massachusetts Governor John Brooks. To his surprise, other guests included John Adams, the Federalist ex-president, and Timothy Pickering, the former Federalist secretary of state who had recalled Monroe from his diplomatic post in Paris in 1796. “People now meet in the same room who would before scarcely pass the same street,” marveled Boston’s Chronicle and Patriot newspaper.

Boston swooned. On July 12, the Columbian Centinel, an ardent Federalist newspaper, published a headline, “Era of Good Feelings,” that would define Monroe’s presidency. “During the late Presidential Jubilee,” the story began, “many persons have met at festive boards, in pleasant converse, whom party politics had long severed.”