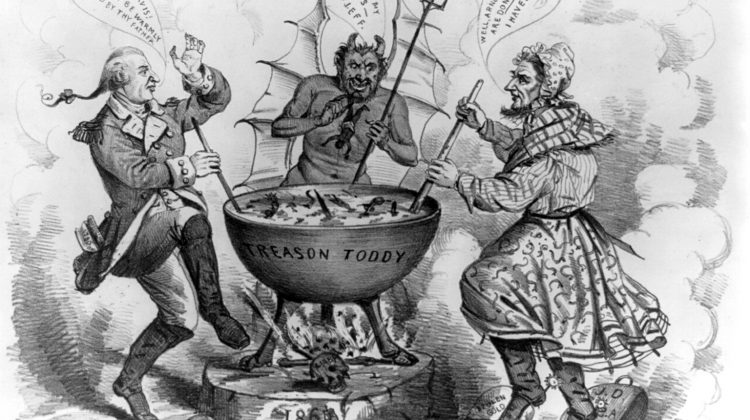 I think it was Virginia Senator Tim Kaine who her first raised the “T” word in the wake of news that senior officials in the Trump presidential campaign, including Donald Trump Jr., met with a Russian lawyer in June 2016.

“Treason” is not a word we use very much in political discourse.  The word harkens us back to an early age in American history.  For example, many will note that the patriots during the American Revolution committed treason against England.  Benedict Arnold committed treason in 1780 when he tried to hand West Point to the British.  Aaron Burr was tried for treason in 1807 after he tried to establish an independent republic from Spanish territory that he hoped to annex from Louisiana and Mexico (he was acquitted). John Brown was convicted of treason against the Commonwealth of Virginia after he led a slave rebellion on the arsenal at Harper’s Ferry.  He was executed.

Over at The Philadelphia Inquirer, historian Brian Carso, author of Whom Can We Trust Now?: The Meaning of Treason in the United States, provides some historical context for this whole Russia-gate mess.

When the Framers completed the Constitution in September 1787, a famous story tells of a woman who approached Benjamin Franklin as he left Independence Hall and asked him, “Dr. Franklin, what kind of government have you given us?” To which Franklin replied, “A Republic, if you can keep it.” Thus, Franklin defined the moral responsibility that is a birthright of every American citizen, which is “to keep it” — to preserve this republic, to put some thoughtful effort into maintaining this fragile experiment in democracy. We call it treason, when such efforts are betrayed.

For all its hyperbole and incendiary color, talk of treason is primarily a rhetorical shorthand that conjures deep-seated feelings of loyalty, national identity, and trust. Historically, when Americans speak of treason, they do so not to identify elements of law so much as to express concern for abstract notions of allegiance and political obligation that they recognize as a profound American tradition.

Prosecutors will have many diverse laws at their disposal to bring about justice should it be proved that individuals assisted the adversarial Russian regime’s interference in our democratic practice. The rest of us will gather about the water cooler, or the kitchen table, and talk about treason.