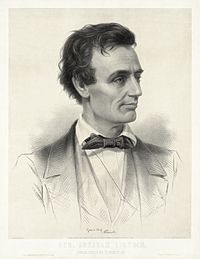 During this Fourth of July week, Harvard law professor Cass Sunstein asks us to consider Abraham Lincoln’s 1838 speech to the Springfield, Illinois Lyceum.  The future President was 28-years-old when he delivered “The Perpetuation of Our Political Institutions.”  Sunstein encourages us to consider this speech for its emphasis on two great American ideals: self-government and human liberty.”

Here is a taste of his piece at Bloomsburg News:

The occasion for the speech was what Lincoln saw as a serious danger, not from abroad but from “amongst us.” Two weeks before, parts of the nation had reeled from a gruesome murder in St. Louis. As Lincoln put it:

“A mulatto man, by the name of McIntosh, was seized in the street, dragged to the suburbs of the city, chained to a tree, and actually burned to death; and all within a single hour from the time he had been a freeman, attending to his own business, and at peace with the world.”

But Lincoln had a broader claim, involving the importance of respect for the law, and of inculcating it in people’s hearts. That idea should “be taught in schools, in seminaries, and in colleges; let it be written in Primers, spelling books, and in Almanacs; let it be preached from the pulpit, proclaimed in legislative halls, and enforced in courts of justice.” He argued that reverence for the law, and for the rule of law, should become “the political religion of the nation.”

Lincoln had an even larger argument. To the Young Men’s Lyceum, he recalled the American Revolution itself, which he described as a bold effort “to display before an admiring world, a practical demonstration of the truth of a proposition, which had hitherto been considered, at best no better, than problematical; namely, the capability of a people to govern themselves.”