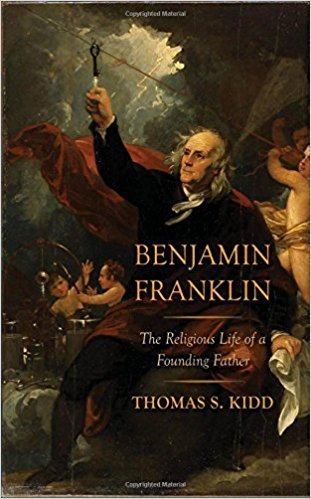 If you are following our #ChristianAmerica? tweetstorm this weekend @johnfea1 ( a tweet every 30 minutes!), you know that we have not said much yet about Ben Franklin. Stay tuned. We will have a lot to say about him tomorrow.

In the meantime, check out Thomas Kidd‘s recent piece at The Washington Post: “How Benjamin Franklin, a deist, became the founding father of a unique kind of American faith.”

Franklin adhered to a religion that we might call doctrineless, moralized Christianity. This kind of faith suggests that what we believe about God is not as important as living a life of love and significance. Franklin grew up in a devout Puritan family in colonial Boston, but by his teen years the bookish boy began to doubt key aspects of his parents’ Calvinist faith. Abandoning Christianity altogether, however, was not a realistic option for someone as immersed as Franklin in the Bible’s precepts and the habits of faith.

Although Franklin did at times toy with some radical anti-Christian beliefs, he settled on the conviction that Christianity was useful because of the way it fostered virtue. Franklin wearied of how colonial Americans incessantly fought about theological minutiae. But he still believed that Christianity represented a preeminent resource for benevolence and charity, qualities he considered essential to any worthwhile religion.

Kidd has just published a religious biography of Franklin.  Some of you may recall his recent visit to The Author’s Corner to discuss it.