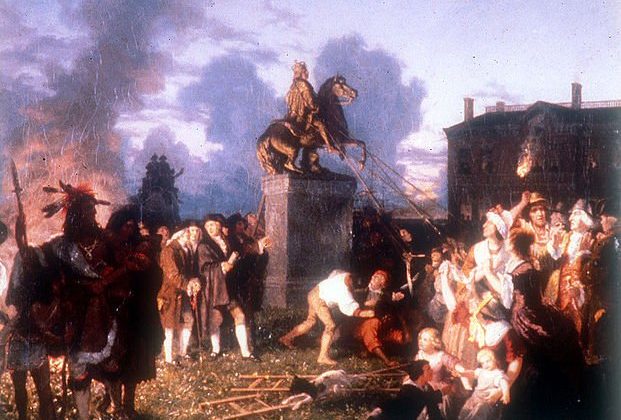 A few weeks ago I wrote a post titled “Removing Monuments: How Far Should We Go.”

Nick Sacco, a public historian and park guide with the National Park Service at Ulysses S. Grant National Historical Site, has made an excellent contribution to this conversation in a piece at History@Work

The people at King George’s monument that day understood the complex purposes of public icons in ways we often forget in our contemporary debate about the role of Confederate icons in America’s commemorative landscape. The King George monument was not a neutral commemoration of historical fact but a political statement of values. British leaders erected the statue because they believed their King deserved a public place of honor among the loyal subjects of their empire. By tearing down the monument, these New Yorkers understood that they were making their own value statement: that King George was no longer worthy of honor and not reflective of their changing values. Breaking with the past and forging a new, independent future required the removal of public symbols that no longer reflected the local community’s values. Indeed, it would be rather awkward today to have this monument to a foreign monarch standing in Manhattan simply because removing it constituted “erasing history.”

To be sure, I am not supportive of a one-size-fits-all solution to the country’s Confederate iconography in which all icons must be removed or kept in place. I also believe a distinction should be made between iconography at a historical site and iconography in a public space such as a park or state capitol. But I have come to embrace the fact that America’s commemorative landscape is always changing as society’s values adjust to new circumstances and our understanding of American history evolves. As Kenneth Foote argues in Shadowed Ground: America’s Landscapes of Violence and Tragedy, the meanings we ascribe to historical places sometimes necessitate alterations to the commemorative landscape. We don’t need to take down a monument for the sake of change, nor do we need to keep up a monument for the sake of tradition. We in 2017 have the right to question a monument erected in 1917, and people in 2117 will certainly question any monument we might erect this year. Rather than asking whether a change in the commemorative landscape constitutes “erasing history,” it might be better to ask whether that change is taking place because the history being removed is inaccurate and/or not worthy of being honored. If a change is required, how can public historians use those changes to foster new and better understandings of the past?