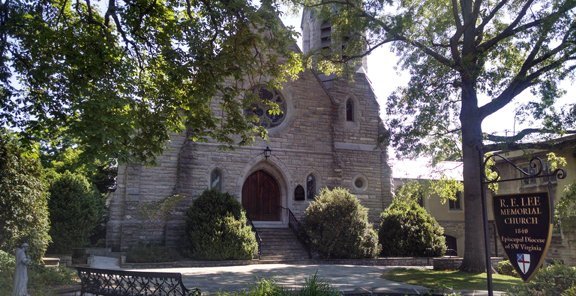 As we reported last week, the Southern Baptist Convention stumbled, but eventually managed to get its act together and condemn racism and the Alt-right at its annual convention last week.  The Southern Baptist Church is the largest Protestant denomination in the United States.  It was founded in 1845 by Baptists in the South who defended slavery.

Over at Christianity Today, Kate Shellnut reports on how historic Southern congregations of all denominations are dealing with their monuments to the Confederacy.

“Few public Confederate monuments have been changed, moved, or razed since 2015,” USA Today reported, estimating 700 to 1,000 such monuments remain across 31 states. “While flags can be lowered, songs censored, mascots switched, and schools renamed, monuments are the most tangible and least mutable memorial symbols.”

The debate over such markers inevitably involves the church buildings that housed—and the many more that later memorialized—the history of the Confederate States of America. The most striking example may be St. Paul’s Episcopal Church in Richmond, Virginia, nicknamed the Cathedral of the Confederacy.

Over the past two years, the historic church, where Jefferson Davis learned that the war was coming to an end, decided to remove plaques honoring Lee and Davis and place them in an exhibit. Gone are the kneelers with the Confederate flag in needlepoint. The church will retire its coat of arms. Leaders are now discussing how to move forward with presenting a history that acknowledges racism and slavery in its past.

“It shouldn’t take a tragedy to turn the tide against racism. Why did it take the murder of nine black people in a Bible study for some people to finally reject the racism associated with the Confederate emblem? Why do people have to literally be killed before we confront racial prejudice?” asked Jemar Tisby, president of the Reformed African American Network. “Christian leaders should be able to challenge racism in the midst of the church without waiting for a public disaster as an entry point to conversation.”