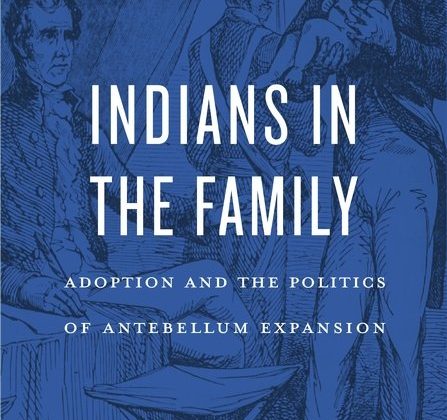 Dawn Peterson is Assistant Professor of History at Emory University.  This interview is based on her new book Indians in the Family: Adoption and the Politics of Antebellum Expansion (Harvard University Press, 2017).

JF: What led you to write Indians in the Family: Adoption and the Politics of Antebellum Expansion?

DP: I came to the adoption stories covered in Indians in the Family: Adoption and the Politics of Antebellum Expansion thirteen years ago. I had entered graduate school in the wake of the September 11, 2001 attacks and the United States’ subsequent “war on terror” and initially wanted to write about how discourses of race and family (particularly those emerging around white 9-11 families) supported imperial wars in Afghanistan and Iraq as well as against immigrant communities and communities of color within this country. Yet after reading Michael Paul Rogin’s work on Andrew Jackson while in my third year of graduate school, I was compelled to go in search of the stories that inspired this book.

New to American Indian studies and early U.S. history, I was struck by one of Rogin’s footnotes, which indicated that, during the United States’ rapid expansion into Indian territories in the first decades of the nineteenth century, several white men, including Andrew Jackson, adopted American Indian children. I couldn’t stop thinking about these white adopters and Indian adoptees in the early U.S. Republic and kept traveling to archives to learn more about them. The research I uncovered showed me that, from the earliest moments of the early Republic’s founding, discourses of family and race played a central role in U.S. nation-making and imperial warfare, in this case against Native communities and enslaved people of African descent. I wanted to understand why this was the case and, just as centrally, how people shaped their lives and their communities in the face of U.S. imperial violence.

JF: In 2 sentences, what is the argument of Indians in the Family: Adoption and the Politics of Antebellum Expansion?

DP: Indians in the Family argues that pan-Indian unity movements solidifying in response to British-American and U.S. territorial expansion during the latter half of the eighteenth century collided with U.S. citizens’ ideas about race, family, slavery, and freedom to give rise to the imperial idea that Indian people and their homelands could—and should—be adopted into the free white populace of the early U.S. Republic. As the United States expanded its territories west, including those of slaveholding Southerners, this imperial idea subsequently informed a series of intimate struggles between U.S. whites, adopted Indian people, and enslaved people of African descent up through the Indian Removal Act of 1830.

JF: Why do we need to read Indians in the Family: Adoption and the Politics of Antebellum Expansion?

DP: As the current president seeks to revive and celebrate the memory of early U.S. elites such as Andrew Jackson, Indians in the Family reveals the profound violence that propelled these figures to prominence. While many have argued that white impulses such as Jackson’s to adopt Native children are a sign of benevolence, the adoption stories that unfold in the book indicate that both ruling white men and everyday citizens within the United States saw themselves as entitled to own the material resources—and the very lives—of those deemed racially “inferior,” including Native children, not to mention people of African descent. Indeed, the fascinating, compelling, and even horrifying interactions between U.S. whites, Native people, and African Americans indicate that the law and culture of the United States was never oriented around freedom, democracy, or social justice, but was there to prop up white supremacy in general, and white nuclear families in particular. Just as importantly, just as the book illuminates the forms of violence historically supporting and emboldening “white” families in the United States, it shows the complex negotiations people of American Indian and African descent made to claim their bodies, their communities, and their lands as their own.

DP: I decided to become an American historian because I needed to learn the deep roots of U.S. imperial and white supremacist policies as well as the various resistance strategies that have challenged them. I felt that in order to live ethically in the world that surrounded me, I had to both understand the mechanisms informing European-descended peoples’ vision of themselves as more worthy of material resources and physical safety than anyone else and, as a white women who materially benefits from this history of violence, engage with and support the life-affirming practices that seek to dismantle colonialism.

DP: My next project continues to explore Native history and its intersections with early U.S. imperialism. In it, I examine how Southeast Indian women navigated extractive U.S. economic policies that aimed to strip Native communities of their economic independence and, in turn, expand Southern slavery into their territories. Focusing on women’s roles in agricultural production, as well as their savvy in local and international trade, I seek to better understand Native women’s efforts in maintaining the economic vibrancy of their communities in the eighteenth and nineteenth century Southeast.