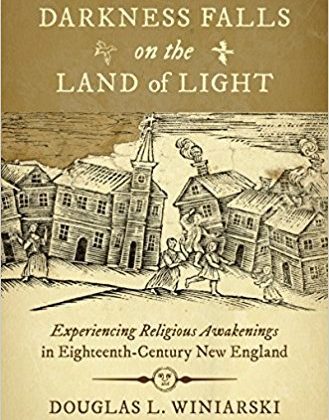 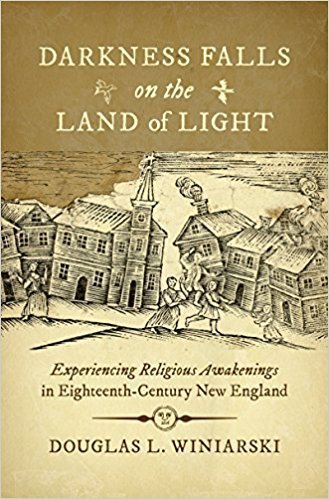 Douglas Winiarski is Associate Professor of Religious Studies and American Studies at the University of Richmond.  This interview is based on his new book Darkness Falls of the Land of Light: Experiencing Religious Awakenings in Eighteenth-Century New England (University of North Carolina Press, 2017).

JF: What led you to write Darkness Falls on the Land of Light?

DW: An earthquake, actually, and a stunning discovery at a public library in Massachusetts. I was a master’s student at Harvard Divinity School looking for some interesting texts to study for a paper I had planned to write about popular religious responses to the famed Great Earthquake of 1727. On a broiling hot summer day in 1995, I drove up to the public library in Haverhill, Massachusetts—which was located near the epicenter of the earthquake—hoping to examine the town’s earliest Congregational church record book. The archivist gruffly informed me that the original volume was too delicate to be retrieved from their vault. But after a little prodding he wandered into the back room pulled out a small bundle of manuscripts: hundreds of neatly trimmed slips of paper bearing short religious narratives written by nearly everyone in the community, from wealthy merchants and Harvard graduates to obscure single women and African Americans.  Half of them had been composed during the surge of church admissions that followed the earthquake. The Haverhill relations turned out to be one of the richest—and certainly one of the largest—collections of religious autobiographical writings composed in British North America prior to 1750. And only a handful of scholars had ever seen them. It’s an experience I’ll never forget. I knew instantly that I had a story to tell about the religious experiences of ordinary people in eighteenth-century New England. Figuring out what that story was, however, required more than two decades of archival work in New England and abroad.

JF: In 2 sentences, what is the argument Darkness Falls on the Land of Light?

DW: The rise of trans-Atlantic evangelicalism during New England’s era of great awakenings sundered an inclusive and flourishing Congregational establishment. The key agents inciting this dynamic and divisive change were not prominent ministers and theologians such as Jonathan Edwards, but ordinary people who learned to experience religion in extraordinary new ways over the course of the eighteenth century.

JF: Why do we need to read Darkness Falls on the Land of Light?

DW: Darkness Falls on the Land of Light is the first book to examine both the thriving Congregational system in provincial New England and the shattering of that system entirely through the religious experiences of lay men and women. The book features an eclectic cast of fascinating characters and unusual events. And it’s built on a vast array of remarkable manuscripts. Although Darkness Falls on the Land of Light is primarily a study of the transformation of New England Congregationalism, readers will come away with a greater appreciation for the diversity of denominations in the region by the time of the American Revolution: Anglicans, Baptists of varying stripes, sectarian groups, and “nothingarians,” or people who held all religious institutions at arm’s length. Above all, I devote considerable attention to examining the costs of the so-called Great Awakening revivals of eighteenth century, something that scholars have been slow to acknowledge. The “people called New Lights”—progenitors of today’s evangelicals—were religious insurgents, troublemakers, radicals; and many of them were bent on breaking apart the Congregational establishment. New Englanders struggled to come to terms with the marketplace of fractious and competitive religious groups that emerged from the revivals. It’s as important a story today as it was during the eighteenth century.

DW: I guess you could say I’m a child of the American Bicentennial. I was caught up with the celebrations and pageantry of my home town in 1976. Four years later, my mother took me on a trip to visit Revolutionary War sites in Boston. I can still remember walking the Freedom Trail and visiting the Old South Church for the first time. I had no idea that these places would play such a prominent role in my professional life. It wasn’t until the final week of college that one of my mentors encouraged me to connect my interest in early American history with my recent undergraduate training in religious studies by applying to graduate school. Suddenly, everything seemed to fall into place.

DW: I am currently working on a new book that explores the fascinating but troubled relationship between the earliest western Shaker converts and the followers of Tenskwatawa, the controversial Shawnee Prophet and brother of the famed war captain Tecumseh, during the years leading up to the War of 1812. The story of the Shakers and the Shawnee Prophet—at least as I envision it at this early stage—is about a religious culture that might have been, one that could have taken shape in the crucible of the early American frontier. It’s a tragic tale in which two notorious groups of dangerous religious outsiders briefly discovered common ground and mutual respect within a racially charged and violent backcountry world. Perhaps when it’s finished, the book may offer a cautionary message for our own times about how we, as a society, should think about religious difference and the relationship between religion and violence. We’ll see.