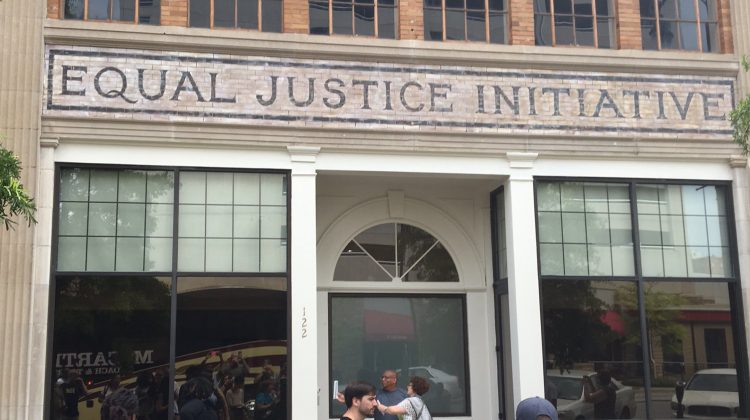 Yesterday I was in Montgomery, Alabama as part of the Returning to the Roots of Civil Rights bus tour.  We spent a couple of hours at the headquarters of the Equal Justice Initiative (EJI), an organization “committed to ending mass incarceration and excessive punishment in the United States, to challenging racial and economic injustice, and to protecting basic human rights for the most vulnerable people in American society.”

EJI was founded by Bryan Stevenson, a public interest lawyer who has dedicated his career to helping the poor, the incarcerated and the condemned.  Some of you may be familiar with his best-selling book Just Mercy: A Story of Justice and Redemption. EJI’s offices are located in the heart of Montgomery’s 19th-century slave trading market. This is a fitting location for an organization committed to fighting the narrative of racial difference in America.

During our visit we heard a presentation from two EJI “Law Fellows,” Luke Fredericks and Evan Milligan.  Fredericks started the presentation by describing four eras in the history of race in the United States.

Fredericks, who was a history major at the University of Maryland, kept reminding us that the pursuit of justice does not happen in a vacuum. In the process, he put his history degree to good use by challenging us to understand the problems of race and mass incarceration in America through context, change over time, and continuity.

In order to provide such context, EJI is getting into the museum and monuments business.  It just released a new website on the history of lynching in America and will soon open a permanent exhibit on the subject.  EJI also plans to create a memorial to the victims of lynching in Montgomery.

Everything about the work of EJI draws heavily on the skills and practices of historians. EJI’s legal activism relies on the connections between the past and the present.  Granted, history can only take us so far when it comes to changing the world (or advocating for death-row inmates), but activism is often superficial without understanding the historical context out of which social ills arise.  EJI uses archival research, oral history, and storytelling (“we use individual narratives to change the way people think and feel”) to provide the necessary context for its advocacy work on behalf of death-row inmates.

So if you want to change the world, start by reading history.