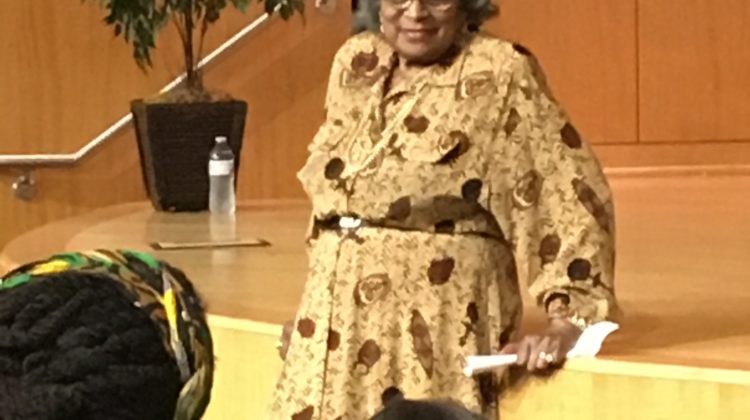 The highlight of Day 2 of the Returning to the Roots of Civil Rights Tour was meeting Juanita Jones Abernathy, one of the participants in, and organizers of, the 1955-56 Montgomery Bus Boycott.  Juanita was marred to Ralph Abernathy, the pastor of Montgomery’s First Baptist Church and a famous civil rights activist in his own right. Ralph died in 1990 at the age of 64.

Juanita talked about the important role played by pastors (and pastor’s wives) during the bus boycott. Because pastors like her husband Ralph were not paid by the state, and thus were not “part of the system,” they were free to organize on behalf of Rosa Parks without the threat of losing their jobs.

She also talked about how the Abernathy children and the King children integrated an Atlanta elementary school sometime in the late 1950s or early 1960s.  (Her son Kwame was with her at the lecture).  I found it interesting that she always referred to the kids as “my kids” or “Coretta’s kids.”When it came to the education of the children, the mothers were in charge.

I tried to write down some of the best lines of the talk.  They are as close to verbatim as possible:

What fascinated me the most about Juanita Jones Abernathy’s talk was how much it was grounded in appeals to common and universal values.  She talked about her love of country (or at least the ideals set forth at the founding).  She drew heavily upon a shared Christian faith as a source for non-violence.

She even described the United States as a “Christian nation.”  This was not unusual during the Civil Rights movement.  As I argued in chapter three of Was America Founded as a Christian Nation?, the Civil Rights movement made constant appeals to the Judeo-Christian values that they believed the nation was founded upon.  The best example of this is King’s Letter from a Birmingham Jail when he says:

One day the South will know that when these disinherited children of God sat down at lunch counters, they were in reality standing up for what is best in the American dream and for the most sacred values in our Judaeo Christian heritage, thereby bringing our nation back to those great wells of democracy which were dug deep by the founding fathers in their formulation of the Constitution and the Declaration of Independence.

Abernathy also described the Poor People’s Campaign of 1968 in universal terms. Poverty affected all races–it was a universal problem and needed to be addressed this way.  She talked the same way about voting rights.

The appeal to ideals that brought together all human beings seems to be quite different from the identity politics we see today in most discussions of race in America. This morning on the bus we listened to a King sermon that referenced Washington Irving, Thomas Carlyle, and the Founding Fathers.  Elsewhere King referenced Augustine, Aquinas, Paul Tillich, Thomas Jefferson, Ralph Waldo Emerson, Henry David Thoreau, and Henry Wadsworth Longfellow, to name a few.  King assumed that his audience–both black and white–were familiar with some of these authors.  Would such appeals be effective today? I don’t think so.  King lived before what historian Daniel Rodgers has described as the “Age of Fracture.”