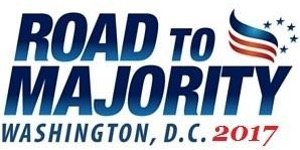 Yesterday James Comey, a former Methodist Sunday School teacher and Reinhold Neibuhr fan, was calling Donald Trump a liar before the Senate Intelligence Committee.  Near the end of Comey’s appearance on Capitol Hill,  the POTUS was speaking to the annual meeting of the Faith and Freedom Coalition (FFC). The irony is too hard to pass up.

FFC is the brainchild of Ralph Reed, the Christian nationalist who came of age in the 1990s as Pat Robertson’s right-hand man and the first executive director of the Christian Coalition.

Reed disappeared from God and country politics in 2005 after he was implicated in the Jack Abramoff Indian lobbying scandal.  In essence, he helped Abramoff mobilize evangelicals to help close casinos on Indian reservations.  He was paid for his efforts by rival casinos.  When Reed expressed concern that the evangelical constituency of his Christian Coalition might not look too favorably on such an arrangement, Abramoff laundered his fees through other organizations.  As Alex Gibney put it in a September 2010 piece in The Atlantic: “there was probably nothing illegal about what Reed did. But, he was engaged in a kind of spiritual fraud: telling his supporters that he was opposed to gambling when, in fact, gambling was making him rich.”

After laying low for a few years, Reed created the FFC in 2009.  He describes his organization as a 21st century version of the Christian Coalition.  This is a good description.  The FFC appeals to evangelicals of a certain age who are nostalgic for the glory days of the Christian Right.  It fuses traditional evangelical moral values with free market capitalism, tax reform, national defense, the GOP, and the support of Israel.

The 2017 FFC conference got underway yesterday.  The theme is “Road to Majority.” So much for the narrow road of Jesus as laid out in Matthew 7.

Proud to be a member of the #19percent.