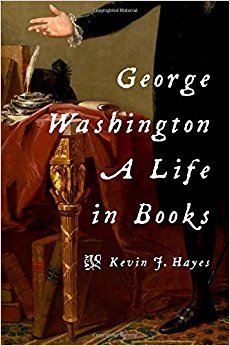 Kevin J. Hayes, Emeritus Professor of English at the University of Central Oklahoma, now lives and writes in Toledo, Ohio. This interview is based on his new book, George Washington, A Life in Books (Oxford University Press, 2017).

JF: What led you to write George Washington, A Life in Books?

KJH: After finishing The Road to Monticello: The Life and Mind of Thomas Jefferson, I began searching for a similar project, that is, another intellectual life of a major figure in early American history. Once I started researching Washington’s life of the mind, other historians tried to discourage me, asserting that Washington had little intellectual life. My preliminary research told me different. The more I researched the more I realized I could tell a story of Washington’s life unlike any previous biography.

JF: In two sentences, what is the argument of George Washington, A Life in Books?

KJH: My book presents a biography of Washington that concentrates on how the books he owned and read shaped the man he became. Organized chronologically and thematically, George Washington, A Life in Books examines many different subject areas Washington studied — devotional literature, histories, travel writing, political pamphlets, agricultural manuals — and situates them within the context of his public and private life.

JF: Why do we need to read George Washington, A Life in Books?

KJH: Though there are numerous Washington biographies available, mine presents a fresh look at Washington, portraying him as both a reader and a writer. It provides a unique view of Washington’s life and adds a completely new dimension to the story of a man we thought we knew.

KJH: I write biographies. This summer, Reaktion, a London publisher, will release my next book, Herman Melville, as part of its series Critical Lives. Over the past few years I have unearthed a considerable amount of new information about Benjamin Franklin, which I am now incorporating in an book-length study of Franklin’s life and writings.