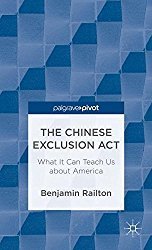 I just came across Ben Railton’s blog “American Studies.”  I found it on The Octo, a collection of blogs assembled by Joseph Adelman for the Omohundro Institute of Early American History and Culture.

I really like his recent post (May 9, 2017) on how he got started with online writing.  In fact, I found it downright inspiring. The lesson: Persist!

As of November 2010, the same month when I began this blog, I began trying to write op ed pieces for newspapers on histories that I believed were missing from contemporary debates over issues like immigration and diversity in America. Over the next four years I drafted and re-drafted a number of such pieces, waiting for moments when the particular issue would rise to the top of the news cycle once again and then sending the pieces out to various newspapers’ op ed pages. I apologize to any editors if I’m forgetting them, but as best I can remember I not only never got any of those op eds published (that I know for sure), but also never received a reply of any kind to any of those submissions (other than the automatic form-reply sent upon initial submission). While I didn’t entirely give up on the possibility (indeed, I kept revising and re-sending the pieces when suitable occasions arose), I have to admit that it started to feel like a minor and largely quixotic pursuit within the overall frame of my career, a way to pretend (I wouldn’t have used that particular word at the time, but I’m trying to reflect as honestly as I can) that I was aiming for public scholarly connections and audience beyond those that this blog or my books or other publications could reach.

In November 2014, thanks to the Scholars Strategy Network, and specifically to its then-Media Director (now Executive Director) Avi Green, that all changed. President Obama was preparing to deliver a prominent, televised speech on his immigration (and Dream Act)-related Executive Order, and I was preparing a new version of my immigration histories op ed (now based in part on the many book talks I had given for The Chinese Exclusion Act: What It Can Teach Us about America [2013]). But this time I shared the piece with Avi first, and—after ruthlessly and crucially forcing me to cut it down and make it more engaging—he encouraged me to place it with Talking Points Memo, Josh Marshall’s website on all things American politics and society. With the help of Avi’s contacts there, my revised immigration op ed, “No, Your Ancestors Didn’t Come Here Legally,” was published on TPM Café; the piece would go on to receive more than 110,000 views, land at #4 on the list of TPM Café’s most viewed posts from 2014, and become the first of more than two dozen biweekly pieces of mine for TPM (and a model for the pieces I’ve written and continued to write for numerous other websites, including my most recent ongoing work as a blogger for the Huffington Post).

There’s a lot that I could say about that moment and what it meant for me, but I think my main takeaway would have to be that it, and thus Avi and SSN, helped me realize for the first time the unique and vital role that short-form online writing can play in a 21st century public scholarly career…