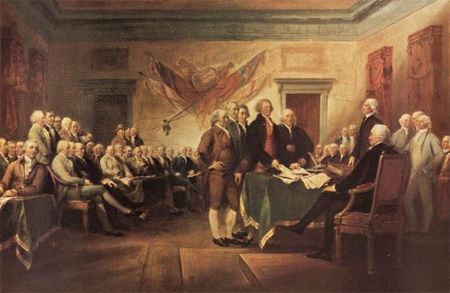 As far as I can tell, this is the first thing I have read from Joyce Chaplin since Ted Cruz attacked her on Twitter.  As I have now said a couple of times, I hope she will write something to put this all to bed.  On the other hand, I would fully understand if Chaplin does not want to open herself up to more attacks.

Here is a taste of Joanna Walter’s Guardian piece:

Fighting broke out in Britain’s American colonies on 18 April 1775, at Concord, Massachusetts. On 4 July 1776, Congress issued the Declaration of Independence. British forces did not surrender until 1781, after the battle of Yorktown, in Virginia.

In 1783, representatives of King George III met in Paris with Americans including founding fathers Benjamin Franklin and John Adams. Representatives of France and Spain also signed the United States of America into formal, internationally-recognised existence.

Chaplin said: “The Declaration of Independence was necessary but not sufficient. The American patriots knew that they needed international assistance to win the war. Even before [4 July] 1776, they sent a diplomatic envoy to Paris – foreign aid and recognition were top priorities.”

She declined to comment on the tone of Cruz’s criticism and his more personal points, saying: “Personal attacks cannot alter the historical record.”

On the history, she added: “Before they recognised the US, the French referred to the Americans as “insurgents” … not citizens of a separate nation … the full spate of recognitions only came after the treaty. Those who recognised the US before were demonstrating antagonism to Great Britain.”

The 1783 Paris treaty formalised the boundaries of the US: north of Florida to the Great Lakes and east of the Mississippi.

“The treaty … in terms of law created the US as one nation among others,” Chaplin said. “By relinquishing claims to the US, Britain also gave force of law to its territorial boundaries, which had not been clear before, from anyone’s perspective …There is scholarly consensus on this.”

She called 4 July 1776 “a first step” on the road to national independence.

Asked if the US now owes it to the rest of the world to stick with the Paris climate deal, Chaplin said that accord was the culmination of centuries of quid pro quo.

“If we turn our backs on the rest of the world now,” she said, “when climate change requires all hands on deck, we are denying centuries of cooperation in a community of nations.”

As linked above, I wrote about this here.

Jay Cost–who knows a thing or two about US history, btw–has weighed into the Twitter kerfuffle that’s erupted between Senator Ted Cruz (a Harvard grad) and Joyce Chaplin (a Harvard historian)…

They both have some of the truth here. If Cruz is insisting that the war was necessary to get Britain to the table, that’s obviously true–but it’s also nothing Chaplin denied. Cruz and his followers are assuming that if Chaplin didn’t mention it, she must be denying its importance. That’s silly. (If Cruz is going further, as many of his followers seem to be going, and is saying our “total victory” over GB allowed us to just dictate terms to them, well, no. There’s such a thing as “total war” I suppose (it’s meaning isn’t entirely clear, but people say it); there is “unconditional surrender”; but I don’t know what “total victory” is.

Chaplin is also correct that without international recognition, you’re not a nation yet. That’s why the Confederate States of America was so eager to gain recognition. Just ask the Basques about that.

As for Cost: This isn’t his finest hour. He makes six points:

1) The Treaty of Paris was bilateral, US and GB, not multilateral. Sure. But now every nation with relations with Great Britain knew the US was now no longer its colonial possession, and was free to treat us as sovereign without incurring the wrath of Great Britain. Point to Chaplin.

2) “The Treaty was a recognition of the facts on the ground, which were that, after their defeat at Yorktown, the British had no chance of reclaiming their American colonies.” A very weak point from Cost. Better to say Britain had no interest in reclaiming the colonies, not “no chance.” As with the US and Vietnam, if GB had really determined to fight that war all out, who knows what might have happened. They were nowhere close to “defeated.” They just lost interest.

3) He says there was no international community. Well, no UN, but sure, there was a community of nations that generally respected each others’ nationhood, accepted their delegations, made treaties with each other, etc.

4) “Insofar as the international community did exist, it was on the side of the United States.” Irrelevant.

6) “Chaplin’s logic leads to ridiculous propositions. Did the ‘international community’ sanction the Glorious Revolution of 1688? Of course not. But, per Chaplin’s logic, Queen Elizabeth II is not the legitimate monarch of Great Britain . . .” This is just dumb. The international community did sanction 1688 by treating William & Mary as legitimate. But more important, it wasn’t really a “revolution,” much less a civil war; it was a major assertion of Parliamentarian authority and a change of monarch. Not at all comparable to our Revolution.

Cost calls Professor Chaplin “pathetic,” “ridiculous,” and “embarrassing.” He should probably apologize. But he won’t. It’s the #AgeOfTrump