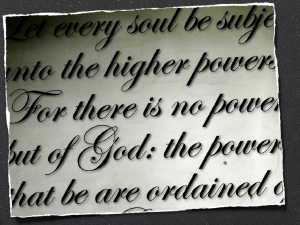 I wrote a little bit about Romans 13 and the American Revolution in Was America Founded as a Christian Nation?: A Historical Introduction.  Over at The Anxious Bench, Chris Gehrz notes that this New Testament passage was also used frequently in the 1840s and 1850s during the debates over slavery.

Even at its peak of popularity in the early 1840s, Romans 13:2 still appears only half as often as the single most popular verse for that time period (Luke 18:16, which generally is 5-20 times as common in the corpus as the two verses from Romans 13).

Not surprisingly, when Romans 13 did enter American public discourse at this time, it was usually as part of the national debate over slavery. In 1839, for example, a Congregationalist minister named William Mitchell quoted that passage in support of his argument that “Civil government, however corrupt, is an institution of God.” Orson S. Murray, the abolitionist editor of The Vermont Telegraph, was appalled:

“No matter then how corrupt the government—from the corrupt, hypocritical republic that establishes by law and holds in existence a most abhorrent and diabolical system of robbery, and lust, and murder, down through all the grades of aristocracy and monarchy, originating in, or originating—as a large proportion of them do—popery, Mahomedanism, and idolatry, in all their degrading, dehumanizing, man-destroying, God-dishonoring forms—all, all these corrupt and corrupting institutions are the workmanship of an all-wise, and holy, and just God!!! The consummate absurdity—not to say the involved shocking impiety and blasphemy—of deliberately and intelligently holding to such sentiments, lies out on the face of the declaration. To expose them, it needs no argument or comment. I would not be understood as denouncing, outright, friend Mitchell, as a blasphemer. I am altogether willing to attribute the monstrous heresy to ‘blindness of mind’—the habit of taking upon trust long received opinions—rather than to perverseness of heart.”