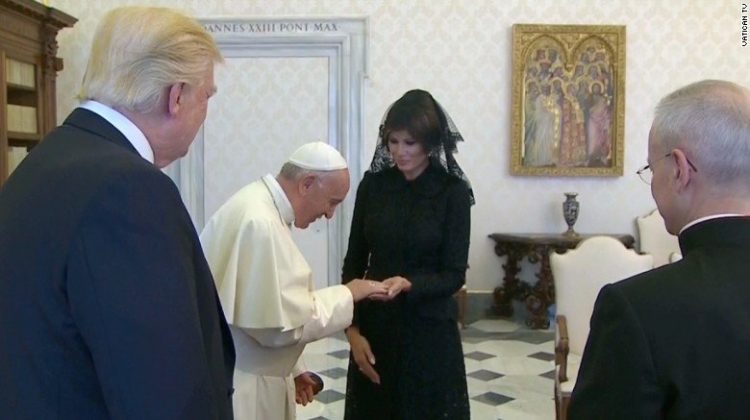 It appears that Catholicism has returned to the White House.

One of the things we learned during the Trump visit to the Vatican is that Melania Trump is Catholic.

After she met with Pope Francis at the Vatican on Wednesday, first lady Melania Trump confirmed a little-known fact about her faith: She is Catholic. And she described the visit with the leader of the Catholic Church as “one I’ll never forget.”

While President Trump referenced his Presbyterian identity during the campaign, her faith did not come up. He and the first lady were married in 2005 in an Episcopal church in Palm Beach, Fla., where their son Barron Trump was later baptized.

The church’s rector performed a traditional Episcopal wedding service, according to the Palm Beach Daily News. “The bride walked down the aisle carrying only an ancient rosary, not to Lohengrin or Wagner, but to a vocalist singing Ave Maria in an exquisite soprano voice,” the local newspaper reported.

Her spokeswoman Stephanie Grisham confirmed in an email that Melania Trump identifies as Catholic, but Grisham did not respond to questions about whether the first lady attends Mass regularly at a specific parish and whether the first family are current members of a church. The first lady, who became a U.S. citizen in 2006, grew up in what is today Slovenia, which has been heavily influenced by Catholicism.

During their visit to the Vatican on Wednesday, the pope blessed the first lady’s rosary beads, and the two had a lighthearted conversation about what she feeds her husband. She spent time in front of a statue of the Madonna at the Vatican’s children’s hospital and laid flowers at its feet.