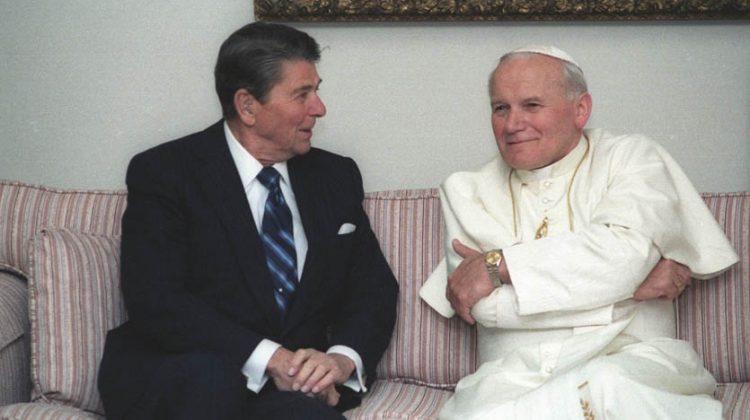 In the wake of Donald Trump’s visit to the Vatican yesterday, David Mislin of Temple University correctly notes that it was once “unthinkable” for a United States President to meet with a Pope.  The history of American anti-Catholicism meant that POTUS-Pontiff visits were out of the question.

But things change.  Mislin describes these changes in his Real Clear Religion piece “Why It Was Once Unthinkable for the President to Be seen With the Pope.”

During the late 20th century, Catholic voters increasingly found common ground with Republicans on social issues such as abortion and a commitment to fighting communism abroad. What had once been the party of anti-Catholicism regularly won the support of nearly half of U.S. Catholics.

By 2016, the GOP had so expunged its anti-Catholic past that many candidates for the party’s nomination for president – including Marco Rubio, Jeb Bush and Chris Christie – were Catholic.

Republican politicians also became willing to do what was once unthinkable: be seen with the pope. In 1959, Dwight Eisenhower became the first U.S. president to visit the Vatican. A representative of the party that had once campaigned on the fear that Catholic leaders would interfere in American politics had gone to Rome to meet the pope. Eisenhower set a lasting precedent. Every Republican president since has made the same trip.

As the 2016 campaign progressed, Donald Trump avoided igniting additional feuds with Francis. Although analysts believed that the candidate had a “Catholic problem,” Trump did quite well with Catholic voters on Election Day. He not only won white Catholics, but he increased the GOP’s share of Catholic voters over 2008 and 2012. Despite his sharp rhetoric on immigration, Trump also won a larger share of Hispanic Catholic voters than the GOP did in those years.

The meeting at the Vatican might well allow Trump an opportunity to put any lingering suspicion of anti-Catholicism to rest and cast himself as the heir of McKinley and Roosevelt’s views on Catholicism. As he departed for Belgium, the president tweeted, “Honor of a lifetime to meet His Holiness Pope Francis.” That’s a far cry from Trump’s past tweets about the pope.