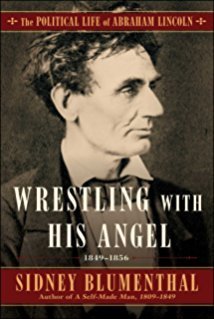 Over at “Just Security,” Lincoln biographer and former Bill Clinton adviser Sidney Blumenthal argues that the 16th POTUS would have probably rejected the idea of “America First.”

During the decade of the 1850s, Lincoln befriended many German exiled revolutionaries, who would become his indispensable allies in the formation of the new Republican Party. Lincoln’s identification of the “spread of slavery” and “monstrous injustice of slavery” with the struggle for democracy abroad drew the parallels of American slavery with European tyrannies and the antislavery struggle with European revolutions. It was also a direct appeal to the large German community in Illinois, composed of refugees from the suppressed revolutions of 1848.

Defending the American “just influence in the world,” Lincoln raised the perspective of liberal Europe to advance his case to Americans. “Already the liberal party throughout the world, express the apprehension ‘that the one retrograde institution in America, is undermining the principles of progress, and fatally violating the noblest political system the world ever saw.’ This is not the taunt of enemies, but the warning of friends. Is it quite safe to disregard it—to despise it? Is there no danger to liberty itself, in discarding the earliest practice, and first precept of our ancient faith? In our greedy chase to make profit of the negro, let us beware, lest we ‘cancel and tear to pieces’ even the white man’s charter of freedom.”

In his little law office in Springfield, Lincoln further deepened his cosmopolitan understanding of the issues at stake. He subscribed to newspapers from across the country and journals from London. His line referring to “the liberal party throughout the world” was quoted without attribution from the New York Times, which had reprinted an article from the London Daily News, whose conclusion warned against “the one retrograde institution in America.” Lincoln’s phrase, “cancel and tear to pieces,” was an unacknowledged quotation from Shakespeare’s Macbeth, a scene in which assassination of the rightful king is plotted. In a letter written in 1855, Lincoln also unfavorably compared the rising nativist movement of the Know Nothings against immigrants to Russia, “where despotism can be taken pure, and without the base alloy of hypocrisy.”

As president, Lincoln presented the Civil War as an international event of the greatest magnitude, the cause of the United States as a liberal republic opposed by the same oppressive forces that had crushed the 1848 revolutions, and which sought the defeat of the American experiment in democracy. It was this idea that led Lincoln in 1862 to call the United States “the last best hope of Earth.”