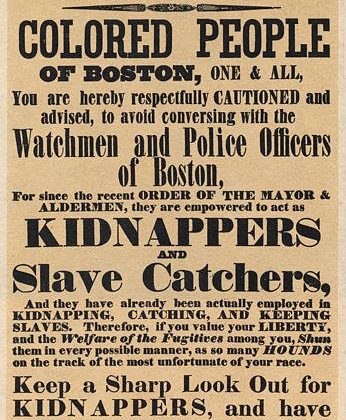 Stephen Kantrowitz is the Vilas Distinguished Achievement Professor of History, African American Studies, and American Indian Studies at the University of Wisconsin-Madison. In a recent essay at Boston Review he compares the racial plight of escaped slaves and free blacks in the antebellum North to 20th and 21st century immigrants to the United States.

Here is a taste of this piece “Refuge for Fugitives“:

The struggle of the 1850s began in and drew its animating energy from African Americans’ analysis of their own circumstances. Slavery hung a shadow over the lives of free black people, even in places where slavery had long been legally abolished, such as Massachusetts. There, African Americans possessed nearly every formal right on the same basis as the “free white persons” legally eligible for immigration and naturalization. But African Americans commonly experienced northern freedom as mocking, hostile, and violent. For the fugitive slave Frederick Douglass, liberty in Massachusetts included a constant, oppressive awareness of being perceived as an inferior. “Prejudice against color is stronger north than south,” he declared; “it hangs around my neck like a heavy weight. . . . I have met it at every step the three years I have been out of southern slavery.” Even in Massachusetts, African Americans were barred from nearly every avenue of economic or educational advancement. Railroad companies segregated black passengers in Jim Crow cars, a policy their conductors enforced with violence. State officials ejected free blacks from official processions, and ruffians chased them from Boston Common. The foremost form of popular entertainment, the minstrel show, mocked their appearance and aspirations. No wonder northern black activists bleakly called themselves “the nominally free,” or “the two-thirds free.” One African American newspaper was entitled the Aliened American.

In this sense, the free black people of the mid-nineteenth century prefigured the struggles of later generations of what historian Mae Ngai calls “alien citizens.” Ngai’s analysis reveals how the U.S. citizenship of native-born Americans of Chinese, Mexican, Japanese, and Muslim background has in practice been limited or nullified by what many consider to be their unalterable foreignness. The radical black activists of a century and a half ago well understood that their compatriots regarded them mainly through the prism of their racial association with slaves. So it has been since, for Chinese Americans figured as unassimilable aliens, Japanese Americans assailed as members of an enemy race, Mexican Americans dubbed “illegals” and rapists, and Muslim Americans branded terrorists. Even those formally vested with citizenship cannot escape the gravitational drag of their racialized association with a dangerous and foreign otherness. Even the mildest formulation of alien citizenship tells the tale: “Right, but where are you really from?”

Instead of seeking to overcome their association with slavery, antebellum African American activists built their activism around it. Defiantly dubbing themselves “colored citizens,” they pursued twin and inseparable projects: freedom to the slave and equal citizenship for all. Some embraced this course because they had been slaves themselves. Others did so because they understood that they could only escape from slavery’s stigmatizing shadow by asserting their common unity, dignity, and equality.

In one sense, the conditions of black freedom left them no choice. Most states that had abolished slavery did not require black people to prove they were free. But the U.S. Constitution’s Fugitive Slave clause curtailed this presumption of freedom. In theory, a 1793 law that gave teeth to this clause provided only for the capture and return of escaping slaves. But the law did not guarantee those accused of being fugitives the right to testify in their own defense, which made it quite possible to enslave a free person. Nor was this the only existential risk free black people faced: the demand for slaves birthed a kidnapping industry with hundreds (possibly thousands) of victims, among them Solomon Northup, who authored Twelve Years a Slave (1853) based on his experience of being illegally enslaved.