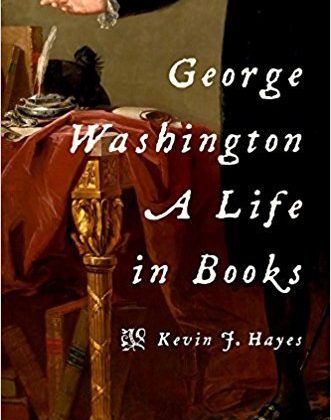 Historian Kevin Hayes has a new book out on the reading habits of George Washington. (Kevin, if you are out there I would love to interview for the Author’s Corner.  I can’t seem to find an e-mail address.  Thanks).

He gives us a preview of George Washington: A Life in Books at the blog of Oxford University Press.

A hundred years ago Ezra Pound criticized American history textbooks for ignoring George Washington’s intellect. More often than not Washington has been seen as a shelf-filler, someone who decorated his home with books, but seldom read them fully or deeply. Here’s an alternate theory: though George Washington never assembled a great library in the manner of, say, Benjamin Franklin or Thomas Jefferson, he did amass an impressive and diverse collection of books that he read closely and carefully and that significantly influenced his thought and action.

No one has ever written an intellectual biography of George Washington. Though Washington’s surviving comments about books and reading are not nearly as extensive as those of other Founding Fathers, he did leave many different types of evidence that, in the aggregate, can help to reconstruct his life of the mind. The evidence takes many different forms:

Though Washington’s library was widely dispersed during the nineteenth century, many of his books do survive. The Boston Athenaeum holds the single largest collection of books formerly in his possession. Additional books survive at Mount Vernon. Other libraries—the Firestone Library at Princeton University, the Houghton Library at Harvard University, the Library Company of Philadelphia, the Library of Congress, the Lilly Library at Indiana University, the Morgan Library, the New York Public Library, the Virginia Historical Society—all hold books from Washington’s library in their collections, most of which I have examined.

With the notable exception of his copy of James Monroe’s View of the Conduct of the Executive of the United States, Washington’s surviving books contain little marginalia, but he did write in his books occasionally. Most of the time he did so to correct typographical errors, but sometimes his marginal notes reveal how he read. Occasionally his notes in one book indicate other books he read. The fact that Washington wrote in his books has gone largely unnoticed, because uncovering these notes requires work that some find tedious. One must examine the surviving books meticulously, turning over one page after another in search of the slightest pencil marks showing that Washington did read the volumes that bear his bookplate.