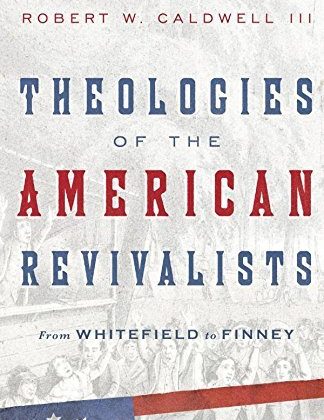 Robert Caldwell is Associate Professor of Church History at Southwestern Baptist Theological Seminary. This interview is based on his new book, Theologies of the American Revivalists: From Whitefield to Finney (IVP Academic, 2017).

JF: What led you to write Theologies of the American Revivalists?

RC: Ever since my seminary days, I have been fascinated at the interplay between theology and Christian experience or spirituality, most specifically related to Christian conversion. As a scholar working on the First and Second Great Awakenings, I found that many revivalists had a well-developed theology that combined soteriology (doctrine of salvation) with insights related both to how Christian conversion was supposed to be experienced and how the gospel is to be proclaimed. I found that from 1740-1840 there was a rich genre of literature that combined these three elements, which collectively I call “revival theology.”

Evangelical churches today have given little theological reflection to the nature of Christian conversion and revival. Much of what they do understand is practically oriented and often pre-theological. In this book I examine the numerous schools of theology that evangelicals employed at a time when there was much more theological writing and preaching on the subject. My hope is that Christians today will be both informed and challenged by the various schools of thought presented in the book.

JF: In 2 sentences, what is the argument of Theologies of the American Revivalists?

RC: Theologies of the American Revivalists argues that American revivalists from the First and Second Great Awakenings (1740-1840) thought, preached, and wrote extensively on what I call “revival theology,” which I define as the three-fold combination of Protestant soteriology, conversion expectations, and preaching practices associated with revival. The book identifies, explores, and charts the historical theological developments of the various different schools of revival theology of the period, with specific attention given to the major controversies and writers.

JF: Why do we need to read Theologies of the American Revivalists?

RC: Revivals have been a fundamental feature of American evangelicalism. My hope is that the book has faithfully explored the multiple theological traditions that have undergirded the revivals of the First and Second Great Awakenings. Theologians and historians will find an in-depth account these various theological traditions and practices. General Christian readers will hopefully come to appreciate the theological backgrounds to evangelical revivals and see just how deep the interplay is between theology and corporate Christian practice. As I mention in the introduction, the book is “fundamentally a theological history about what it has meant to ‘become a Christian’ during the age of America’s Great Awakenings.” (10)

RC: I come to American history as a student of intellectual history and historical theology. I have always been fascinated by the interplay of thought and history. Numerous scholars shaped my work during my student days. As an undergraduate at Northwestern University, I was drawn to the history of science and Isaac Newton’s theology while taking several courses from Dr. Betty Jo Teeter Dobbs in the late 1980s. When I went to seminary at Trinity Evangelical Divinity School I benefitted greatly from courses by Drs. John Woodbridge and Douglas Sweeney, both of whom know how to situate theology deeply in its historical context. There, my interests shifted to the history of theology of American evangelicalism, especially that of Jonathan Edwards. Studying Edwards, his theology and legacy, as well as the First and Second Great Awakenings has required me to become more proficient as a historian. In many ways I still feel like I am becoming an American historian.

RC: I am working on two smaller projects now. The first deals with the lesser-known antinomian controversy that surfaced in the late 1750s upon the publication of James Hervey’s Theron and Aspasio in England (1755). The controversy involved a broad cross-section of American and English non-conformists: New Divinity and traditional Calvinists, Sandemanians, Radical revivalists, Moravians, Methodists, and English Particular Baptists. Another study addresses Jonathan Edwards’s assessment of Isaac Watts. Both Edwards and Watts attempted to do theology while simultaneously engaging the enlightenment. Edwards found Watts’s strategies for doing this woefully inadequate, even though he admired Watts in many ways. Both studies illuminate some of the lesser-known intramural debates that existed among early evangelicals on both sides of the Atlantic.