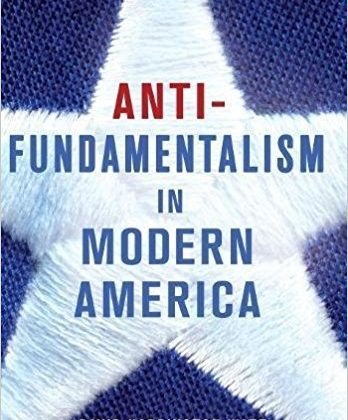 David Harrington Watt is Professor of History at Temple University. This interview is based on his new book, Antifundamentalism in Modern America (Cornell University Press, 2017).

JF: What led you to write Antifundamentalism in Modern America?

DW: In the late 1970s—when I was still an undergraduate at Berkeley—one of my professors suggested that I read Ernest Sandeen’s The Roots of Fundamentalism. Ever since then, I’ve been fascinated by Protestant fundamentalism in the United States.   Shortly after I read Sandeen’s book, I began encountering texts in which Muslims such as the Ayatollah Khomeini were referred to as religious fundamentalists.  Within a few years, I became accustomed to seeing texts in which the fundamentalist label was applied to Jews, Hindus, Sikhs, and Buddhists as well to Muslims and Christians.  Antifundamentalism in Modern America is the result of my trying to find out how and why such a broad array of believers—many of whom didn’t seem to have all that much in common with the people Sandeen wrote about—came to be thought of fundamentalists.

JF: In two sentences, what is the argument of Anti-fundamentalism in Modern America?

DW: In the early 1920s North Americans began saying that certain groups of people were fundamentalists.  From then until the present day the concept of “fundamentalists” has been routinely deployed to conjure up a set of dangerous others: men and women who are said to constitute a threat to science, peace, justice, and progress.

JF: Why do we need to read Antifundamentalism in Modern America?

DW: “Need” is an interesting word, isn’t it?  It raises the dread specter of a “required list of assigned readings.”  I don’t want anyone to feel as though they are being required to read Antifundamentalism in Modern America. Readers who want to know more about the history of fundamentalism might, however, enjoy reading it.  So might readers who want to know more about the creation and evolution of categories that are used to identify people whose beliefs and practices are thought to be problematic.  Readers who are interested in what is lost and what is gained when people who don’t think of themselves as fundamentalists get called that by others might also enjoying reading Antifundamentalism in Modern America. I certainly enjoyed doing the research on which the book is based.

DW: There is a sense in which I never did decide that.  As an undergraduate I focused on history.  In graduate school I took courses in American Studies as well as in history.  At Temple University—where I’ve taught for thirty years—most of my work has been in history rather than religion.  But I have warm and friendly relations with Temple’s Religion Department and the book series that Laura Levitt, Tracy Fessenden, and I edit for the NYU Press is (for the most part) devoted to works in religious studies rather than history.   This fall I’m going to begin teaching at Haverford College.  Most of my courses there will have to do with various aspects of Quaker Studies.

Being a disciplinary nomad has presented a few challenges, but it has had some advantages, too.  For one thing, it has given me a chance to keep track of the truly extraordinary work on religion in the United States that is being produced by scholars in both religious studies and history.   It has enabled me to learn from scholars such as Judith Weisenfeld and Marie Griffith and from scholars such as David Hollinger and Matthew Sutton.   That has been deeply rewarding.

DW: My next project grows out the current one.  As I was studying the history of antifundamentalism, I repeatedly encountered forms of Protestantism that could be described as “liberal,” “progressive,” or “secular.”  Scholars have already taught us a lot about those forms of Protestantism.   But there is still much work that needs to be done.  I’m especially interested in liberal, progressive, and secular forms of Quakerism and the ways in which those forms of Quakerism have influenced U.S. culture as a whole.  In the contemporary United States many people who would never dream of joining a Quaker congregation gladly send their daughters and sons to schools that are committed to “Quaker values.”  One of the questions I’m interested in exploring is why it is that “Quakers values” sometimes seem to be far more appealing that Quakerism itself.