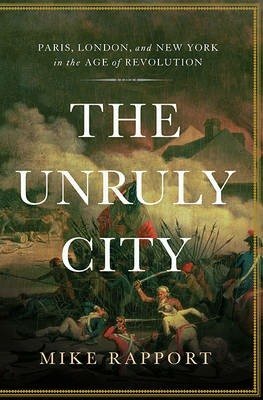 Michael Rapport is Professor of History at the University of Glasgow in Scotland and a fellow of the Royal Historical Society. This interview is based on his new book, The Unruly City:  Paris, London and New York in the Age of Revolution (Basic Books, 2017).

JF: What led you to write The Unruly City?

MR: I love walking – in the Scottish Highlands, in countryside and along coastline, but also in cities.  When you walk through a city with a long past, like Paris, London and New York (it has been pointed out that New York is older than Saint Petersburg or Versailles) you get a strong sense of the topography, which is often in itself the physical footprint of the past, no matter how much building and reconstruction has taken place over the decades.  And of course you can come across gems among the buildings and spaces – sometimes an entire street or neighbourhood – that bears an historic character.  All of this sparked my curiosity: what were these cities like two-and-a-half centuries ago?  And how did their citizens experience the upheavals and the fight for democracy in my own historical period, the age of the American and French Revolutions?  How were the buildings and the cityscape marked by these struggles?   I chose to write about Paris because it was the beating heart of revolutionary politics in France; New York because I wanted to explore the vicissitudes of revolution, war, occupation and reconstruction (after the fire in 1776)…and because of all American cities I probably know it the best; and London because it avoided revolution, so took an alternative political path.  These are also three cities that I love.

JF: In two sentences, what is the argument of The Unruly City?

MR: I start from an apparently obvious point, namely that revolutions take place in a physical space, that they of course erupt over ideology and culture, political power and social change, but that they are also in a very real sense struggles for the strategic and symbolic control of key places and spaces within the cityscape.  How revolutionaries, radicals and their opponents then adapted, embellished and used the buildings, streets and other sites in the city tells us a lot about the revolutionary process itself.

JF: Why do we need to read The Unruly City?

MR: Firstly, and foremost, I hope, out of pure curiosity: I cannot emphasise enough that this is a book that I wrote primarily to be enjoyed.  Secondly, I hope that readers will share in my own pleasure in walking the city.  While this is not a guidebook to Paris, London and New York, it does gently tell readers (either in the text itself or in the endnotes) how they can find each new site where the action unfurls.  Thirdly, the story of the American and French Revolutions, and of the British democratic movement in the same years, reminds us that many of the rights and freedoms that we enjoy were fought for in the past – and that they are still a matter of contest in many parts of the world today.  Finally, many of the streets, buildings and spaces described in the book still exist today, or their imprint does.  Although their association with the tumultuous events of the revolutionary epoch may now often be forgotten, or overlaid by other, more recent developments, they are – or could be – sites of memory, places that connect us directly with the eighteenth-century struggle for democracy.

MR: This will take some space to answer…because I am primarily a European historian.  So to begin with ‘when’, we are all, in different ways, students of history throughout our lives.  I’ve been interested in the past for as long as I can remember.  My father, George Rapport – who is, amongst other things, a keen historian – always encouraged my interests in history and, for a few years, he lived in Belgium, a cycle-ride from the battlefield of Waterloo.  As my interests developed – and because I have both Swedish and Russian heritage – I was drawn to European history.  Moreover, although I was born in the United States (in Bronxville, New York) I have lived almost all my life in Europe, particularly France, England and, for the most part, Scotland, so my identity is probably best described as transatlantic.  I’ve always loved the creative and intellectual challenges of writing – short stories, an historical novel, and, above all, history – and in my late teens was drawn to a career in journalism.  But at school I also had a truly inspiring history teacher – Jeremy Barker – who was a zealous devotee of European history, and particularly modern France and the French Revolution.  At the same time, my mother and stepfather Mike moved to Paris, so historical passion aligned with location: I had found my period, and my place, namely revolutionary France.  My mother Anita was always there to remind me that much of history was social history, so the discovery of ‘how people lived’, has become a mantra.  So I’ve always been absorbed, one way or another, in pursuing the past.  That’s the answer to ‘when’.

That leaves the answer to ‘why’: despite my focus on Europe, my American origins have always been in the background – and they were (and still are) regularly foregrounded by frequent return trips to the US.  When we were boys, my brother Allan and I travelled with my father around sites of the American Revolution.  We visited Civil War sites, too: since my father is an alumnus of the Virginia Military Institute, it could not have been otherwise.  My father also wrote a novel about the Fetterman Massacre, during which time my stepmother, Jane, treated us to a trip to Montana and Wyoming as part of the research.  So I’ve had grounding in American history since at least my early teens.  As an undergraduate at the University of Edinburgh in Scotland, I won the Class Medal in the sophomore survey course on American History and then went on the study, as part of my Honours programme, the social history of colonial America under Alan Day, who had pursued his doctorate under none other than Jack P. Greene.  It also so happened that Helen, a Scottish historian (and, it should be said, a specialist in Scottish urban history) and the woman who became my wife, was in the same seminar group, so (as they say) we were firing on all cylinders.  And though I went on to pursue doctoral work at Bristol University with Professor Bill Doyle on the French Revolution, my focus has always been on the revolution in a wider, international context.  I rapidly discovered that, in order to understand the transnational dimension of the French Revolution – its origins, course and legacy – one must also understand, amongst other dimensions, the Atlantic perspective.  So I find myself pulled, repeatedly, back to the young American Republic and the Americas.

MR: Rather alarmingly, there are four irons heating up in the furnace.  Firstly, in writing The Unruly City, I came across (rather belatedly) a series of theoretical approaches to space and place that has exercised some historians and cultural geographers, namely the ‘spatial turn’, which engages with the different ways in which space, place and location affected human behaviour.  So I am writing a book on revolutionary Paris which deploys the hardware in this arsenal.  Secondly, I am working on a book for Cambridge University Press, A Concise History of Europe.  Thirdly I’m editing The Oxford Handbook to Europe in the Long Nineteenth Century, 1789-1914 and, fourthly, I have edited, with my excellent friend and colleague Ben Marsh of Kent University (and an American historian to boot), a volume on Teaching and Understanding the Age of Revolutions, a collection of essays published by the University of Wisconsin Press by leading and up-and-coming historians on a variety of cutting-edge, innovative approaches to teaching and learning about the many different aspects of the ‘age of revolution’ in the Atlantic world.

JF: Thanks, Michael.  You are a busy man!