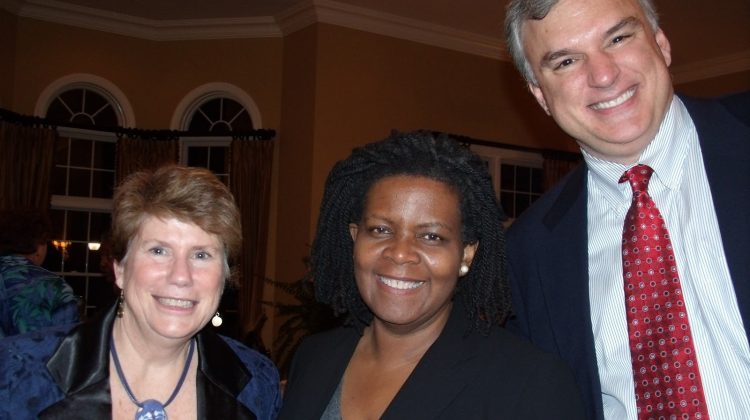 The Harvard Gazette is running a long interview with Pulitzer Prize winning historian Annette Gordon-Reed.  Over the course of the interview she talks about her childhood, her escape from the ashes of the World Trade Center on 9-11, and her approach to writing and teaching.

Here is a small taste:

Q: Returning to your scholarship, you once said in an interview that you had come to know several Thomas Jeffersons. Can you explain what you meant?

A: I suppose I have come to know different Jeffersons as I have become different myself, because you notice different things as you get older. And after working on “Most Blessed Patriarchs: Thomas Jefferson and the Empire of the Imagination,” with my co-author Peter Onuf, I tend to notice vulnerability more than I did before. The book is about him through his entire life, but I would say the perspective is from the older guy looking back over his life, and from that perspective you realize how hard it is to do things.

The Jefferson that I see now is more vulnerable. When I was younger, I saw Jefferson as more powerful than any normal human being. And that tendency to attribute supernatural powers to him helps account for a lot of the anger that people have about him: “Why didn’t you end slavery? Why didn’t you do something about slavery?” And then you think about someone who was a lawyer, a governor, a revolutionary, who wrote the Declaration of Independence, was an ambassador, who was a vice president, who was a president, who founded a university, and then you say, “And why didn’t you end slavery?”

I think about the people who say that, and I think about myself. What is it that I’ve done that approaches all of that? And in asking that question, I now see him with a bit more humility, recognizing how hard it is to do anything, how hard it is to accomplish things. I don’t think the fact that he didn’t accomplish more than he did is a reason to dismiss all the things that he did accomplish. So I think I am a bit more sympathetic, although studying a person’s life can drive you crazy at points. You yourself often wonder why did you do this, or why are you doing that?

The goal for the last book was to try to understand him on his own terms, to accept the problematic aspects of his life and work, but to also have a degree of humility in looking at a historical figure who didn’t have the advantages that we have in understanding the world. I am much more concerned about people today who harbor racial sentiments that are destructive, who have had a chance to learn more than somebody who was born in 1743…

Q: As an African-American woman was it hard to do this research on a personal level?

A: Well it comes and it goes. It came and it went, I should say. For the most part I think people who study slavery are not as sensitive to it as we should be to how other people react. People read this kind of material and are aghast. Historians understand that this was the world that was there. Still, there are always moments when you just are sort of brought up short. I remember reading about when Jefferson sells Mary Hemings, Sally Hemings’ oldest half-sister. Mary had asked to be sold to Thomas Bell, a white man she had been living with while Jefferson was in Paris. They had children together. Jefferson sells her but he doesn’t sell her older two children because they are not considered children at this point — they are 14 and 10. That moment just struck me. It was a weekend and I had been typing away in my New York office and I just started crying because I started thinking of my kids and how when they were 10 how heartbroken they would have been. Now Mary doesn’t move far from them; she is two miles up the road. But kids want to be around their mother, you know. There are moments like that that happen.

But you can’t let your emotions overtake you so much that you can’t do the work. What you are supposed to be doing for them as a historian is telling their story. It’s like visiting someone in a hospital. It can be heartbreaking, but you’ve got to go, because they are expecting to see you. And you have to find the strength in yourself to do that, and then go off and cry or whatever. So it’s very much like that. It would be, I think, self-indulgent if I let my emotions about this get me to a point where I can’t look clearly at the problem, the issue, the situation and be able to take that and to write so that other people can see it. It’s not about me. OK, it is about me to the extent that it’s always about the writer to some degree, but it’s more about the communication, and you have to keep a presence of mind to be able to do that.

You can also check out our interview with Gordon-Reed and University of Virginia historian Peter Onuf on Episode 8 of The Way of Improvement Leads Home Podcast.