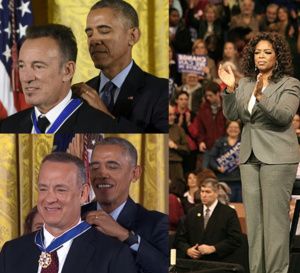 Damon Linker nails it in his regular column at The Week.

The global elite think they’re sitting pretty. How wrong they are.

Democrats keep telling themselves that Hillary Clinton “really” won the 2016 election (or would have, had it not been for interference by Vladimir Putin and James Comey). Republicans keep patting themselves on the back about how much power they now wield at all levels of government. And centrists throughout the West are breathing a sigh of relief about Emmanuel Macron’s likely victory over the National Front’s Marine Le Pen in the second round of the French presidential election on May 7.

You can almost hear the sentiments echoing down the corridors of (political and economic) power on both sides of the Atlantic: “There’s nothing to worry about. Everything’s fine. No need for serious soul searching or changes of direction. Sure, populism’s a nuisance. But we’re keeping it at bay. We just need to stay the course, fiddle around the edges a little bit, and certainly not give an inch to the racists and xenophobes who keep making trouble. We know how the world works, and we can handle the necessary fine tuning of the meritocracy. We got this.”

And why wouldn’t they think this way? They are themselves the greatest beneficiaries of the global meritocracy — and that very fact serves to validate its worth. They live in or near urban centers that are booming with jobs in tech, finance, media, and other fields that draw on the expertise they acquired in their educations at the greatest universities in the world. They work hard and are rewarded with high salaries, frequent travel, nice cars, and cutting-edge gadgets. It’s fun, anxious, thrilling — an intoxicating mix of brutal asceticism and ecstatic hedonism.

The problem is that growing numbers of people — here in America, in the U.K., in France, and beyond — don’t see it like this at all. Or rather, they only see it from the outside, a position from which it looks very different. What they see is a system that is fundamentally unjust, rigged, and shot through with corruption and self-dealing.

They see Marissa Meyer, the CEO of Yahoo, taking home a cool $186 million in stock (on top of many millions in additional salary and bonuses) for five years of “largely unsuccessful” work.

They see Henrique De Castro, who worked briefly for Meyer at Yahoo, pulling $109 million in compensation for a disastrous 15 months on the job.

They see Roger Ailes and Bill O’Reilly getting fired from Fox News for sexually harassing a parade of women over the years — and taking home tens of millions of dollars each in severance.

They see former Democratic President Barack Obama sharing a $65 million book advance with his wife, earning $400,000 for a single speech scheduled to be delivered in the fall at investment bank Cantor Fitzgerald, and gallivanting around the globe with David Geffen, Bruce Springsteen, Tom Hanks, Oprah Winfrey, and Bono.

In Washington, they see a president who promised to act as the people’s voice appointing a long list of millionaires and billionaires to top positions. They see the White House and Congress struggling to pass a health-care bill that will leave millions more without insurance coverage at a time when a majority of Americans and a plurality of Republicans favor a single-payer system that would cover all. They see a president proposing to drastically cut corporate and individual taxes (including the elimination of inheritance taxes, which will benefit only the richest of the rich) when polls show that the top frustration with the tax system is that corporations and the wealthy don’t pay their fair share. They see a unified push to cut government programs at a moment when polls show a growing share of the public prefers bigger government.

And yes, I am willing to criticize Springsteen and Obama here.

At the same time, the populist critique of the global elite must be an educated critique. Such a critique is no excuse for ignorance or a fundamental misunderstanding of the kinds of questions raised by the humanities about how to live together in a democratic society.  Give Archie Bunker a book–preferably a history book! 🙂