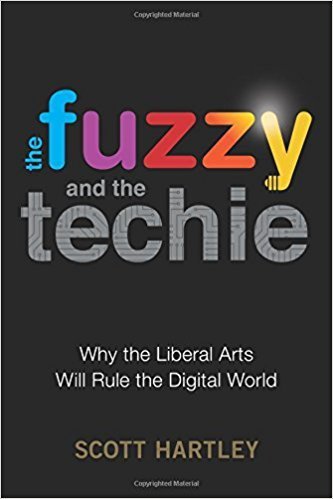 This issue keeps coming up.
Yesterday during a faculty meeting I listened to a colleague explain digital humanities to a group of more traditional-minded humanists.  He discussed the digital humanities as an effort to bridge the divide between computer scientists and humanistic inquiry.
Last weekend we dropped Episode 21 of The Way of Improvement Leads Home Podcast.  Our guest was Scott Hartley, a venture capitalist who came of age in the Silicon Valley.  Hartley’s new book The Fuzzy and the Techie: Why the Liberal Arts Will Rule the Digital World argues that liberal arts graduates usually have the most creative and successful business ideas.
Now Wired magazine is getting into the act.  Check out Emma Pierson‘s piece “Hey, Computer Scientists! Stop Hating on the Humanities.
Here is a taste:
As a computer science PhD student, I am a disciple of big data. I see no ground too sacred for statistics: I have used it to study everything from sex to Shakespeare, and earned angry retorts for these attempts to render the ineffable mathematical. At Stanford I was given, as a teenager, weapons both elegant and lethal—algorithms that could pick out the terrorists most worth targeting in a network, detect someone’s dissatisfaction with the government from their online writing.
Computer science is wondrous. The problem is that many people in Silicon Valley believe that it is all that matters. You see this when recruiters at career fairs make it clear they’re only interested in the computer scientists; in the salary gap between engineering and non-engineering students; in the quizzical looks humanities students get when they dare to reveal their majors. I’ve watched brilliant computer scientists display such woeful ignorance of the populations they were studying that I laughed in their faces. I’ve watched military scientists present their lethal innovations with childlike enthusiasm while making no mention of whom the weapons are being used on. There are few things scarier than a scientist who can give an academic talk on how to shoot a human being but can’t reason about whether you should be shooting them at all.
Read the rest here.