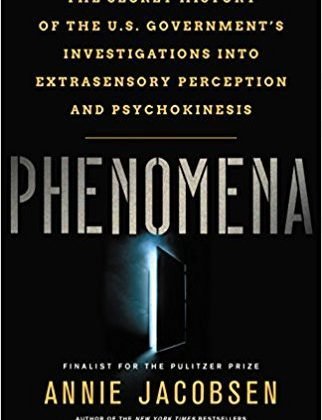 It turns out that the United States government has had a long fascination with psychics, the paranormal, ESP, and the occult.

Check out Colin Dickey’s review of Annie Jacobsen’s book Phenomena: The Secret History of the U.S. Government’s Investigations Into Extrasensory Perception and Psychokinesis at the New Republic.

In 1952, the U.S. Army asked Duke University to help them develop a program to determine if dogs were psychic. Specifically, they wondered, could dogs use extrasensory perception (ESP)? To this end, researchers carried out a series of 48 tests on a beach in Northern California to see if dogs could locate underwater explosives. At first, the results pleased the scientists, who concluded that there was “no known way in which the dogs could have located the under-water mines except by extrasensory perception.”

Let us pause for a minute before going further. A dog’s olfactory capabilities are 40 to 50 times greater than those of a human; its hearing is four times stronger. Judging them by human metrics, dogs literally have extrasensory perception. This does not mean, however, that they are psychic or paranormal. And sure enough, further tests failed to deliver any supernatural results. A follow-up program was deemed an “utter failure,” and researchers noted a “rather conspicuous refusal of the dogs to alert.”

This experiment is only one of the strange stories—many of them recently declassified—in Annie Jacobsen’s Phenomena: The Secret History of the U. S. Government’s Investigations Into Extrasensory Perception and Psychokinesis. As with her previous books on Area 51, Operation Paperclip (the secret project to bring Nazi rocket scientists to the U.S. after the war), and DARPA (Defense Advanced Research Projects Agency, which develops new technology for the Defense Department), this one begins with the fallout of World War II and the extreme measures the military-industrial complex took to unlock and weaponize psychic abilities in the early days of the Cold War. Spanning over 50 years, Jacobsen’s tale takes us from the immediate postwar years to the CIA’s experiments in the 1960s and ‘70s. The Defense Department, she tells us, began its own experiments in the 1980s and ‘90s, before their final incarnation, Project Stargate, was finally decommissioned in 1995.